Should we be wary of what we post to social networks like Instagram? Montreal resident Jennifer Pawluck found out the hard way. She posted a picture of Cmdr. Ian Lafrenière, a Montreal police spokesman, shown with a bullet hole piercing his head on March 26th to Instagram, reports the CBC.

According to the law, something deemed a genuine (even if unintentional) threat is grounds for arrest.

She claims she only took a picture of the image but did not create it. Police disagreed and charged her with criminal harassment and intimidation against a high-ranking Montreal police officer. Last Wednesday police picked her up from her home and questioned her for hours, then released on her promise to appear in court.

Montreal police say there is more related to the arrest than what is known at the moment, but hasn’t clarified anything yet.

The National Post says Pawluck has no history of any criminal record but has admitted to being fined by police for participating in anti-tuition marches deemed illegal by police. The picture below was posted to her Instagram timeline: 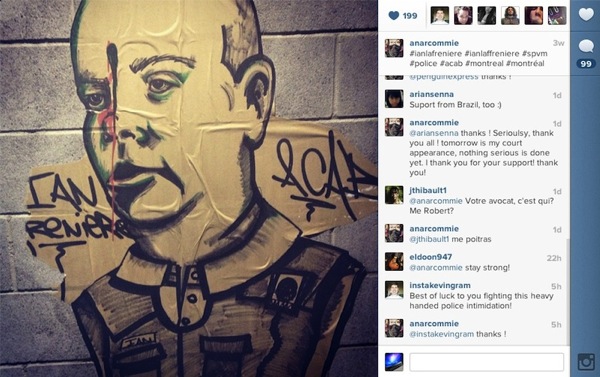 Pawluck appeared in court today and pleaded not guilty, with further proceedings postponed until May 24th. What do you think about this case?

Today, Xbox and Bethesda are hosting their Developer_Direct stream. The first digital showcase of the year from Xbox is said to provide new information and gameplay for a handful of anticipated games arriving on Xbox, PC, and Xbox Game Pass. Xbox announced the Developer_Direct earlier this month. Setting expectations accordingly, fans can expect to hear...
Steve Vegvari
21 mins ago