As the 2015 tax return deadline looms (April 30, 2016!), the Canada Revenue Agency wants you to know about their new mobile optimized site, MyCRA (it’s not really a standalone mobile app like they’re calling it).

MyCRA was created to allow taxpayers to “securely access and view key portions of your tax information such as your notice of assessment, tax return status, benefit and credit information, and RRSP and TFSA contribution room,” right from your smartphone’s browser.

When iPhone users visit the page in Safari, there’s a pop up that suggests you add the web app to your home screen: 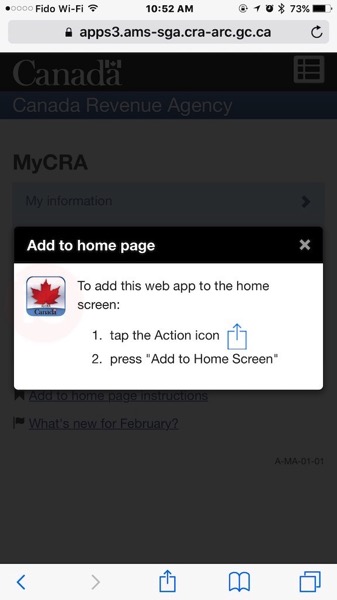 Below is the MyCRA mobile web app infographic, which details what the mobile site can do for you: 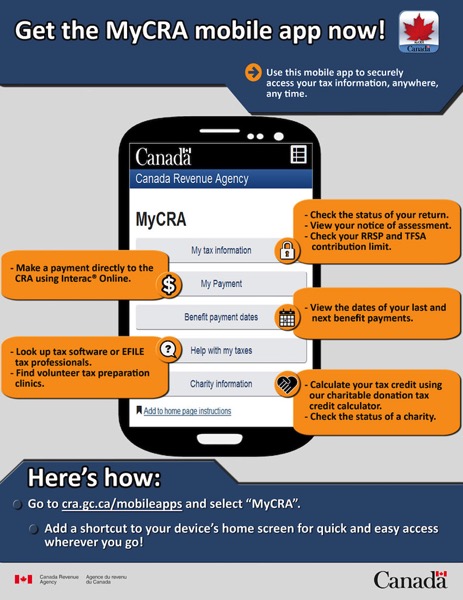 According to the CRA, last year saw 10,172 returns filed on mobile software, some of which may have been partially completed on a smartphone. The CRA says 82% of Canadians filed electronic returns in 2015.

For iOS users, there numerous options available to file your tax return from iPhone or iPad, such as with Turbo Tax Free or Snapfile (service starts at $24.99), which allows returns by snapping images of your tax receipts, which are then filed by a tax professional based in Edmonton.