While most of us are still trying to adjust to the Micro-SIM cards in iPhone 4 and iPhone 4S handsets, the developers of the original SIM card Giesecke & Devrient (G&D) has just introduced the first ever Nano-SIM card. It is 30 % smaller than the current micro-SIM cards and almost 60 % smaller than conventional, full-sized SIM cards. Nano-SIM card is also 15 % thinner measuring a mere 12mm x 9mm in size. It is believed that this will allow manufacturers like Apple to produce even thinner devices or possibly make use of the extra room for larger displays, batteries etc. 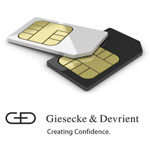 As reported by GIGaom:

G&D, a Munich-based company, produced the world’s first SIM card, and like Apple, it is seeking to shrink the form factor as far as it will go. In May Apple submitted a nano-SIM standard to the ETSI (European Telecommunications Standards Institute). G&D says the organization aims to standardize the nano-SIM by the end of the year, and an adapter will make the nano-SIM backwards-compatible with older devices.

It is rumored that Apple, which already uses the micro-SIM, has been actively involved with G&D in developing the new form factor.