Have you signed up with Netflix Canada? The service made the splash in Canada in late September 2010, and the initial library continues to improve. Netflix announced its fourth quarter earnings today, and its revenue has continued to rise. They have just over 20 million subscribers at the moment. Sensational.

Today’s announcement shed some insight about its operations in Canada. Netflix says the Canadian service should start becoming profitable in the later third quarter:

The Canada service is supposed to start making money during the third quarter.

What’s also interesting to note, is that Netflix streaming on the latest Apple TV surpassed viewing from 15 million iPads. Impressive stat. According to Electronista:

Netflix while discussing breakthrough results on Wednesday surprised the industry with word that the new Apple TV was already more popular than the iPad for Netflix movie viewing. Apple’s media hub had already accumulated more viewing hours in its first four months than the iPad managed in nine. The movie rental service didn’t try to explain the gap, but it suggested many still preferred to use Netflix’s movie streaming on a TV despite the surge in tablet video.

We’ve watched more shows on the Apple TV versus my iPad. The Netflix integration with Apple TV is just awesome. Some hilarious gems I’ve seen recently include: Taken (for the second time), School for Scoundrels, Clerks 2, and Outsourced.

Below is a graphic comparing the number of streaming titles in Canada versus the USA from the Globe and Mail. The Canadian service started out with 7000 movies and shows, and has been updated twice so far: 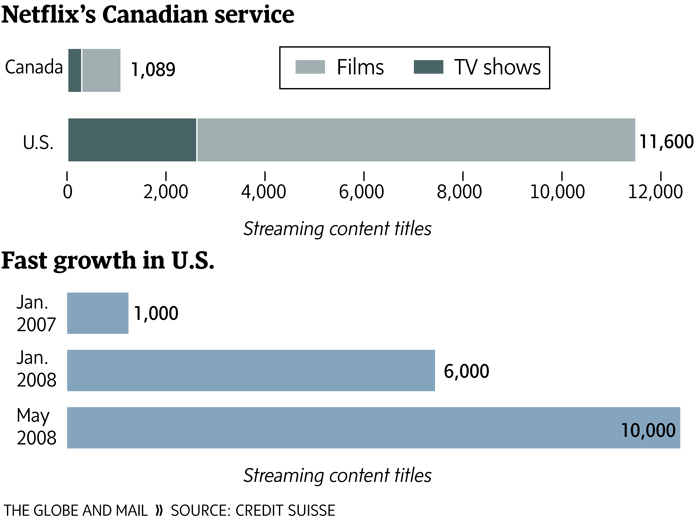 Will The end of Unlimited Internet Affect Netflix Canada?

The CRTC recently allowed Canadian internet providers to practice “usage-based billing”, which essentially will lead to raised rates and reduced download limits. What perfect timing, just as Netflix Canada has started to gain in popularity. Rogers is also guilty of cappingÂ internet downloads just prior to Netflix Canada’s debut.

You can make your voice heard by signing the petition at StoptheMeter.ca (thanks Holly).

Netflix Canada is worth trying out as you can watch titles from any iOS device, your computer, PS3, XBOX, or Wii. The more people that sign up for the Canadian service will bring better content. I’ve already seen some awesome titles added to the library, such as Seasons 34/35 (plus 8 specials) of SNL, Top Gear, Republic of Doyle, and The Tudors to name a few. Watching all three seasons of Mad Men in HD alone makes the monthly fee worth it.

Are you signed up with Netflix? How do you like it so far?