Netflix Knows How Many Episodes it Takes to Get You Hooked 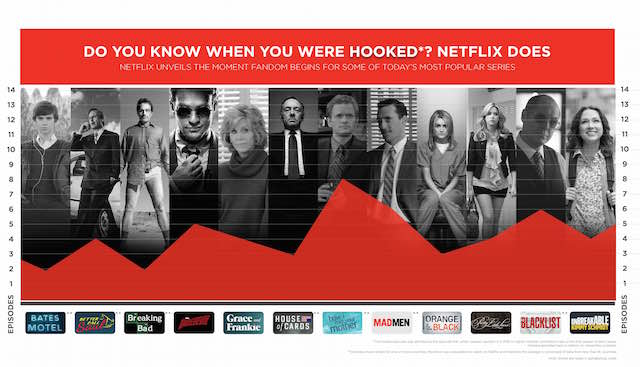 Netflix has today unveiled that it now knows exactly how many episodes it takes to get you hooked to a particular TV series. The streaming company has been analyzing our watching habits (which includes data from Canada) to figure out exactly how we all get obsessed with some of today’s most popular shows.

“In our research of more than 20 shows across 16 markets, we found that no one was ever hooked on the pilot”, said Ted Sarandos, Chief Content Officer for Netflix, adding that this is why they give their subscribers access to all episodes at once.

“There’s a unique sense of intimacy with creating a show for Netflix. Knowing you have an audience’s undivided attention and that in essence, they are letting these characters in their home, we unfolded storylines at a more natural pace,” said Marta Kauffman. “In episode four, we see Grace and Frankie having no choice but to confront their fear, anger and uncertainty head on, which to me as a creator was a nice turning point to shift the narrative to focus on the future instead of the past; it is nice to know viewers were there right along with us.”

While around the world the hooked episode was relatively consistent, slight geographic differences did present themselves. The Dutch, for instance, tend to fall in love with series the fastest, getting hooked one episode ahead of most countries irrespective of the show. Germans showed early fandom for Arrow whereas France fell first for How I Met Your Mother.

According to Netflix, a hooked episode was defined when 70% of viewers who watched that episode went on to complete season one. Hooked episodes were first identified by country, then averaged to create the global hooked episode. Netflix has today presented its findings on 25 of the most popular shows. Take a look below: 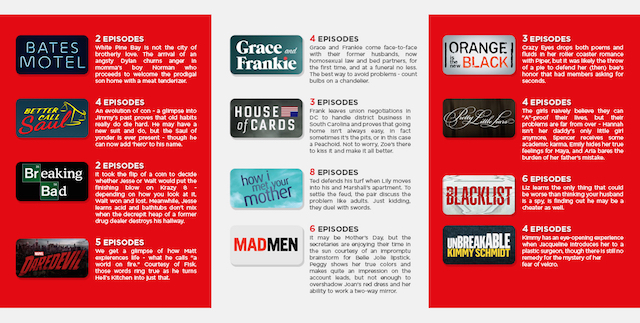 Currently, Netflix has over 65 million subscribers in over 50 countries, with slightly different streaming content available in different countries. Fortunately, there are workaround services such as this lifetime deal for Getlfix have made it possible for Canadians to access US Netflix (and other geo-restricted content) seamlessly as well.