TikTok-inspired Netflix short-form video feature “Fast Laughs” is now available on the TV platform. Previously, the feature was available only on mobile devices, where it introduces users to new shows, movies, and comedy specials they might like (via TechCrunch). 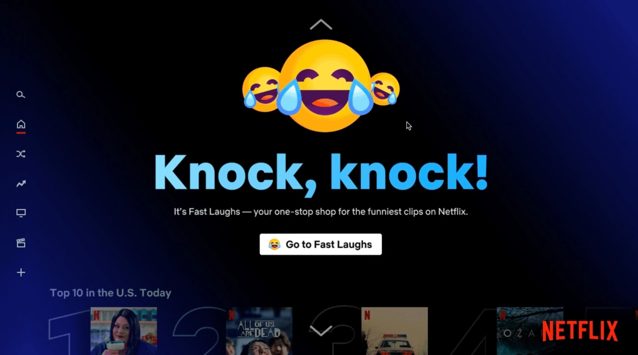 Similar to TikTok, “Fast Laughs” offers a swipeable, vertical video feed on smartphones where buttons to react, share or save the content are stacked on the right side of the screen. On Netflix’s TV platform, however, “Fast Laughs” will work a bit differently.

The opt-in feature will show up on users’ homepages, serving up the short videos at a time when users have been scrolling down looking for something to watch. The videos can be clicked through with your remote control via the arrow on the right side of the screen.

At the bottom of the screen, you can see the program’s name and rating and can choose to click a button for “More Info,” to be directed to the title’s landing page.

At launch, the TV version of “Fast Laughs” will include clips from Netflix movies like “Army of the Dead,” “Fatherhood” and “The Kissing Booth;” TV shows like “Big Mouth,” “Dead to Me” and “Never Have I Ever;” stand-up comedy from Ali Wong, Jo-Koy and Jerry Seinfeld; and more.

Netflix says “Fast Laughs” on the TV is still a test feature and will initially be rolling out in the U.S., Canada, the U.K., Ireland, New Zealand, and Australia.