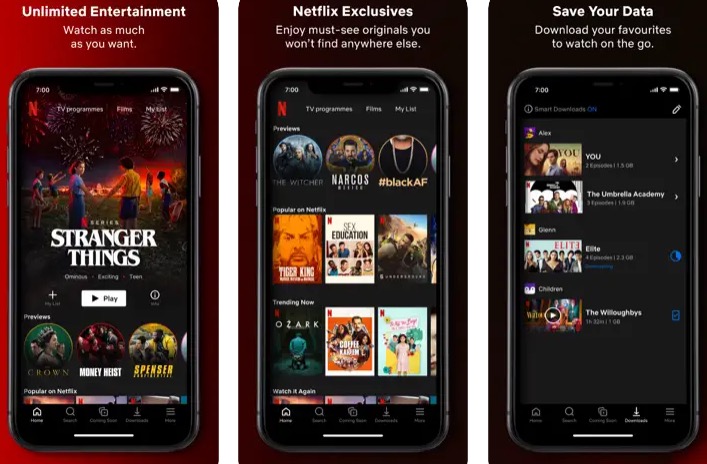 Netflix has launched a major update to the user interface on iPhone and iPad, and it’s gorgeous.

Janum Trivedi, who formerly worked at Netflix working on the iOS user interface, announced the update that was also created by UI designer Canadian Adam Bell from the streaming service, and Ben J.

Earlier this week on Monday, Netflix updated its iOS app. The app update only explained, “Keep your app updated to get the latest Netflix experience on your iPhone and iPad. And in this release, we’ve fixed bugs and made performance improvements. Just for you.”

But the update brought an all new user interface with gorgeous cards and transitions, taking many by surprise.

“This last year, I’ve been leading a UI refresh to make Netflix feel more fluid, delightful, and polished,” said Trivedi. “Today, all that work shipped! Huge thanks to @nebson and @b3ll for helping bring this to life.”

There’s now a new billboard layout that “responds as you move your device, with a subtle lighting effect.”

Also new are wallpaper gradients that are “created on-the-fly from the art,” plus new card transitions that are fully interactive and interruptible.

It has been a blast collaborating with @jmtrivedi and @nebson on adding motion, delight, and gestural interactions to bring a more fluid and responsive experience to Netflix on iOS.

I’m excited for you all to try it and let us know what you think! ✨ pic.twitter.com/Rgsh4LDdon

The update also brings new launch and profile animations and haptics as well, as part of the newest UI refresh.

Trivedi says the blur radius is being animated instead of the opacity, which means “that way we don’t get the hazy fingerprint-on-lens effect.”

For now, this new Netflix UI update is only available on iOS. It’s unclear if it will make its way to Android but at some point, it would make sense to do so.

Next week is the beginning of a new month, so that means yet another list of what’s coming to streaming services such as Amazon’s Prime Video. Below are all the new shows and movies coming to Prime Video Canada in February 2023. Check it out below… February 1 Bodies, Bodies, Bodies The Mummy Schindler’s List […]
Gary Ng
24 mins ago