According to a report by Tutu Android (via CNET) ), Netflix is testing a new, higher tier of service called ‘Ultra’ in select regions, that would allow four devices to simultaneously receive Ultra HD video and audio streaming.

“We continuously test new things at Netflix and these tests typically vary in length of time,” Smita Saran, a Netflix spokeswoman, confirmed in an email.

“In this case, we are testing slightly different price points and features to better understand how consumers value Netflix.”

Not all Netflix subscribers will see the test and the company may not ever offer the specific price points or features being tested, Saran said.

Currently, Netflix offers three subscription plans i.e. Basic for streaming on one screen at a time, Standard for viewing on two screens, and Premium for streaming on four TVs, laptops, tablets or smartphones simultaneously. However, the upcoming Ultra plan may affect some aspects of the current Premium plan. 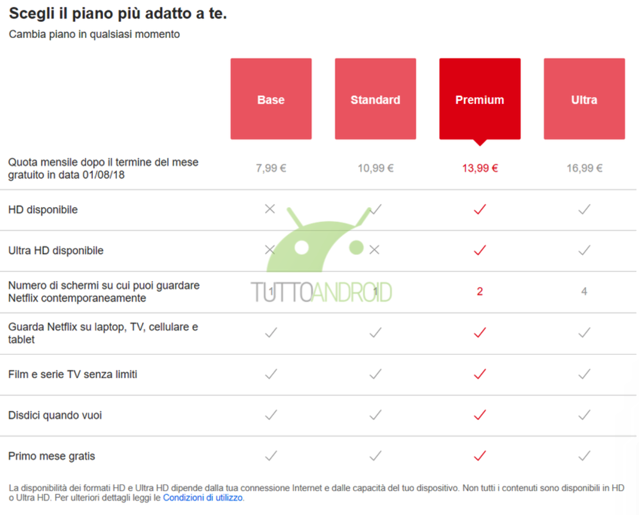 Looking at the above promotional screen from Netflix Italy (via PhoneArena), it seems the Ultra plan would halve the number of screens Premium users can use simultaneously from four to two. Also, the standard plan may also be downgraded to just one screen at a time.