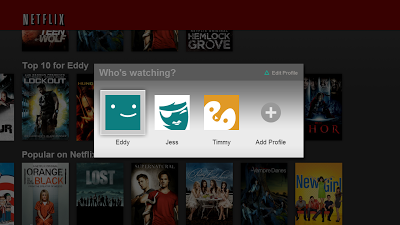 After some users experienced new Netflix user profiles a couple days ago, the company this morning has officially announced the launch of the new feature.

Today, we are launching a new feature on Netflix that solves that problem and makes it even easier to find something that you will enjoy. You will be able to add additional profiles (up to 5) for each member of your household that uses Netflix. Each person will get personalized suggestions based on what they watch and rate, as well as separate Recently Watched and Instant Queue lists. You can also connect each person to a different Facebook account, to get personalized suggestions from your friends.

The company says all you have to do is provide a name to create your profile and the feature will start to roll out in the next few days on its website, iPad, iPhone, Apple TV, gaming consoles and newer Smart TVs. Below is a video teaser of Netflix Profiles:

Click here to sign up for Netflix–the first month’s free and you can watch it from any iOS device, Apple TV, Mac/PC, gaming console and more. Let us know if you start seeing this new feature!