In an attempt to encourage podcasters to start offering paid subscriptions to their listeners, Apple is rolling out a handful of new features for its Podcasts app, including the ability for podcasters to see how many people follow them on Apple Podcasts (via TechCrunch). 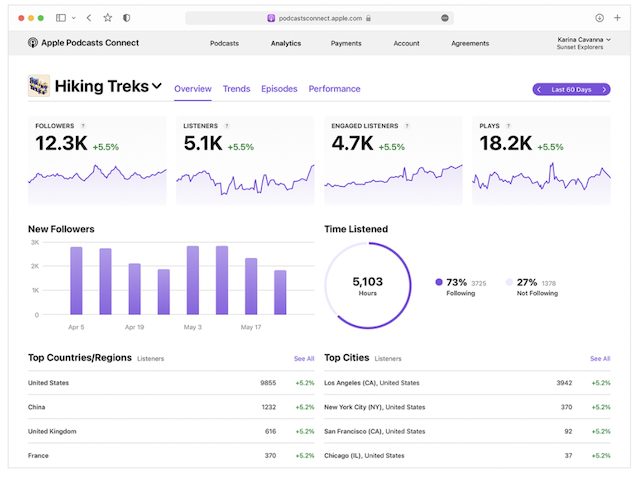 Before today, Apple had not made follower counts visible to creators, even though the Apple Podcasts Connect page has shown stats about how many listeners they have. But since the majority of podcast listeners use Spotify, their stats on the Connect page did not reveal the actual picture as they only show Apple Podcasts’ listenership.

Starting next month, podcasters will be able to view followers per show and easily measure followers across shows from the Analytics tab. Once selecting a show, they can quickly view the number of New Followers netted over the last week, month, 60 days, and all time.

All creators will be able to view metrics for Followers in Apple Podcasts Connect beginning next month. By navigating to the Trends menu, creators can view a graph of followers over time and the number of followers gained or lost on a specific day or during a specified range.

Creators, remember to encourage listeners to follow your show on Apple Podcasts and subscribe to support you and unlock a premium experience.

Apple has highlighted some accessibility features available on its devices such as iPhone and Mac, using YouTube Shorts to do so (hence the portrait orientation). The company demonstrated Sound Recognition and Facial expression switches by reaching out to social media influencers such as Scarlet May and Illy Willie. The videos below were showcased on Saturday: […]
Gary Ng
27 mins ago