Apple launched Fitness+ today and while existing Apple Watch users are getting a free month trial, part of a limited time offer, new Apple Watch Series 3 or later customers are supposed to get 3 months of the service for free. 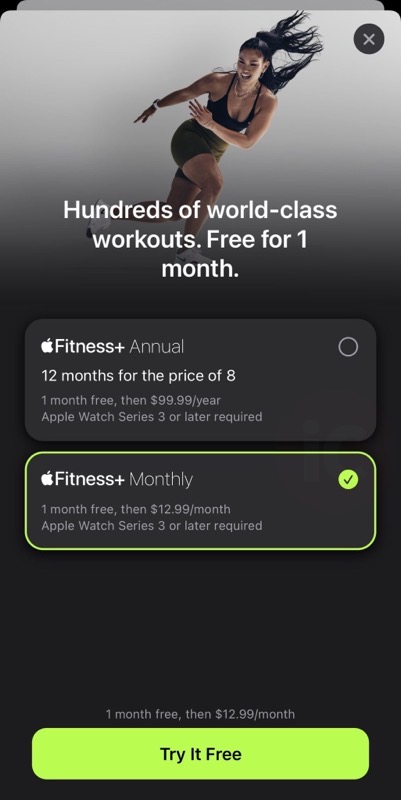 But new Apple Watch owners have contacted iPhone in Canada to say this isn’t the case right now, despite updating all devices to iOS 14.3 and watchOS 7.

The terms and conditions of the offer state, “Redeem your 3 months free in the Fitness app as soon as Apple Fitness+ launches,” which is of course today.

“Offer must be claimed in the Fitness app within 3 months after first setting up your eligible device. To see the offer appear, you will need to sign in with your Apple ID on your new device. If you’ve purchased your eligible Apple Watch before the launch of Apple Fitness+, you will have 3 months starting on the launch date to redeem,” details Apple’s terms and conditions.

Apple says any Apple Watch Series 3 or later, “purchased from Apple or an Apple authorized reseller, and activated on September 15, 2020 or later is eligible.”

But right now that’s not happening for new Apple Watch Series 6 and SE devices purchased by readers Jonathan and Jed, from Apple and an authorized reseller (London Drugs).

We spoke with Apple Support regarding the matter on the phone, and they were only able to echo the Fitness+ promo terms. It’s unclear how this matter will be resolved.

To sign up for Fitness+, you need to launch the Fitness app on iPhone or iPad (you need to manually download it) and tap on the Fitness+ tab along the bottom.

Are you seeing your free 3-month Fitness+ trial offer in the Fitness app, for your new Apple Watch purchase?

Update Dec. 14, 7:51 pm: In order to get your 3-month Fitness+ trial, if you are having trouble, chat with Apple Support and get help from iTunes billing. We’re told they will send you a promo code which will give you 3 months free, plus the free month, for four months total.

Also, unpairing and re-pairing your Apple Watch also works too.