Apple: New Apps Must Support iPhone X, Be Built with iOS 11 SDK as of April

Apple has emailed developers to inform them of new requirements for apps, as of April 2018. According to the email, new apps being submitted starting in April must be built with the iOS 11 SDK, plus also support the iPhone X and its Super Retina display:

Starting April 2018, all new iOS apps submitted to the App Store must be built with the iOS 11 SDK, included in Xcode 9 or later. All new apps for iPhone, including universal apps, must support the Super Retina display of iPhone X. 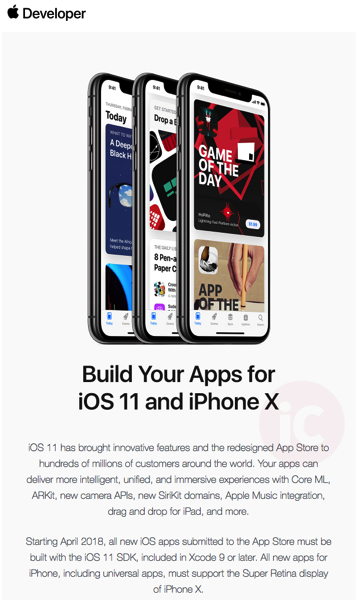 Apple says “iOS 11 has brought innovative features and the redesigned App Store to hundreds of millions of customers around the world.”

What does this mean for users? If you have an iPhone X, expect new apps being submitted to the App Store to accommodate the “notch” on your display. If there are new iPhone models coming with ‘notches’ this year, it also means new apps will natively support them as well.