Building up on its recently launched Yahoo Sports app for iOS, the company has today announced the release of a new Yahoo Sports Fantasy app just ahead of the upcoming football season set to kick off on September 8, in order to help your dominate your fantasy leagues from beginning to the end. The app is available as a free download for iOS devices, and will be released soon for Android as well. 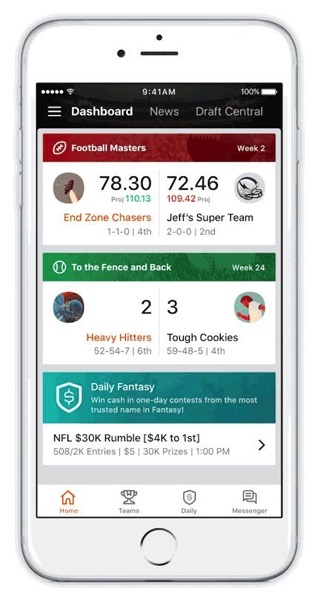 The app presents you with a similar homepage experience, with a dashboard offering easier access to navigating and managing all of your teams from full season and daily fantasy. Fantasy managers can seamlessly jump between teams, leagues, games in progress and trash talking with your friends. The dashboard also acts as your homebase for all the relevant info you’ll need at a quick glance. From matchup scores to injuries and trades, all the information you need to be ahead of the game is right there.

“We’ve also made navigation faster. Quickly swipe back and forth between your matchup and team roster to stay on top of all the game action.

The new Yahoo Sports Fantasy app also brings our award-winning expert content front and center.  Andy Behrens, Brad Evans, Brandon Funston, Dalton Del Don, Liz Loza and Scott Pianowski are at your service with fantasy rankings and videos to help you prep and dominate your drafts all the way to a championship run. You never have to leave the mobile app!”

You can grab the universal app using the following App Store link: