As expected, Nintendo’s first ever iOS app ‘Miitomo’ has been released in Japan today, which according to The Wall Street Journal, is actually a social tool with familiar features, such as the option to post comments and add graphics to photos. Similar to Facebook and Snapchat, users can also “heart” each other’s posts. “We believe we created a number of elements that are very sticky for the consumer,” said Reggie Fils-Aimé, president of Nintendo’s U.S. division. 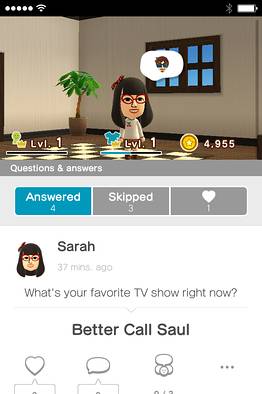 Nintendo has also announced the launch of its new rewards program today called “My Nintendo”. TouchArcade’s first impressions of Miitomo shows that the app and the new rewards program are closely linked to each other. Playing Miitomo earns you points that you can exchange on My Nintendo for discounts on games, console themes, and other digital rewards.

Users start off in Miitomo by creating or importing a Mii, and then assigning a voice and personality to it. They are then asked questions like their favourite food and clothes etc. After that, users can do whatever they like, such as buying clothes to dress up their Mii or answer even more questions.

It’ll search automatically for any other users in your respective contact lists who are using the app and allow you to send a friend request to them. Once added, you’ll be able to talk to your Mii to found out the answers your friends gave. You can also share photos of your Mii doing various things through these accounts. As with Nintendo’s 3DS Tomodachi Collection, these pictures are often pretty goofy, so they’re kind of fun to show to people.

At the moment, that’s basically all there is to it.

If you tinker around the app long enough, you may be able to earn enough points to pick up something like The Legend Of Zelda: Twilight Princess Picross for your 3DS. The only problem for now is, the app is available in Japan only through it won’t be long before it makes to the U.S., Canada and other countries in the App Store.