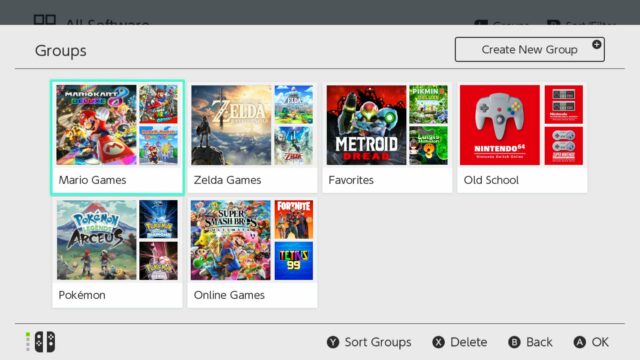 Nintendo has finally added support for a folder-like feature on the Switch. As a part of the firmware 14.0, users can now create ‘Groups’ of their games, organizing the hybrid console’s UI.

Announced via Twitter, Nintendo’s software update is now available for users to install on their system. Five years after launch, the Switch now supports the ability to group games together. However, groups cannot take the place of the Switch’s Home menu page, with its individual game tiles laid out.

The latest #NintendoSwitch update is now available, including a new feature to create groups for software on the console.

Delving into the support page, Nintendo outlines how users can now create a group for their games. From the Switch’s Home menu, users must scroll all the way to the right and select All Software and press the L button. All Software will only appear if there are more than 12 games saved on the Switch.

During the first instance of creating a group, a pop-up will appear and users can select ‘Create New Group.’ After this, users must only hit the ‘+’ button to create one. Users will then be able to select the games they’d like to add to a group, rearrange them however they’d like and name the group afterwards. The group will then be added to the ‘Groups’ list.

This feature may not be the most vital for the Switch’s hardware. However, it does give users a chance to curate their own lists and organize. Though, it is unfortunate that the groups cannot replace the tiles on the Home menu for quicker access. Nintendo has been slowly adding highly requested features as of late. The 14.0 software update also included updates to the system’s Bluetooth support, which was added last year. Users can now adjust the volume on the Switch or the Bluetooth audio device. Maximum audio has also been increased thanks to the new firmware update.