According to the latest numbers from Canalys, Apple’s iPhone shipments grew 19% in Q1 2022 to achieve a 51% market share bolstered by the strong performance of the iPhone 13. North American smartphone shipments reached 39 million units, up 3.7%. 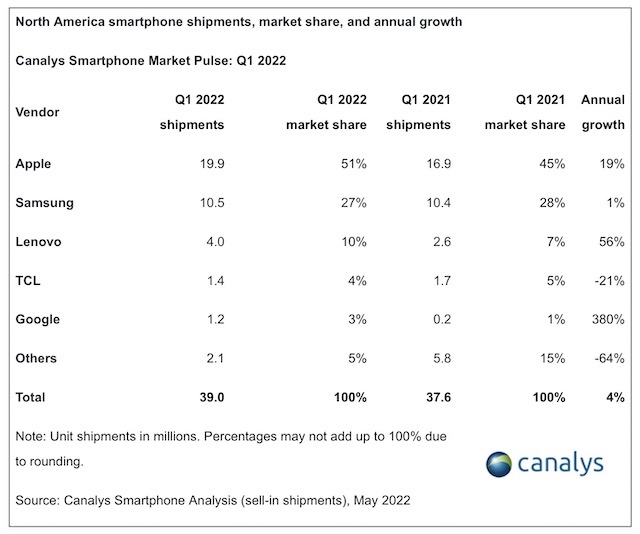 The analyst continued that with global demand more uncertain, Apple “shifted more devices back into North America after prioritizing other regions in Q4 2021.” In addition, the launch of the latest edition of the iPhone SE offers an affordable option for many of North America’s fiercely loyal iOS users, he said.

“Despite not being mmWave-enabled, carriers’ increasing investments in C-band and sub-6GHz spectrums will open the door for the iPhone SE’s market growth in the coming quarters.”

Samsung was up 1% to take a 27% market share, thanks to its new S series and A series devices covering a range of price points. Motorola defended its strong Q4 2021 performance, which saw its focus on taking over LG’s former carrier slots and supply capacity pay off.

TCL and Google completed the top five, with 4% and 3% market shares respectively.