Onavo is the free app we previously reviewed that shrinks your data plan, and allows for the use of Pandora radio in Canada. Onavo has polled their database of Canadian iPhone usage, and sent us some very interesting stats.

The average iPhone data usage in Canada is 404MB on the iPhone, and is evenly split amongst the major Canadian carriers. Bell users lead the way at 423MB average per month, Telus next at 409MB, Fido at 406MB, and Rogers users at 378MB. Note, these numbers are based on iPhone users that have Onavo running. 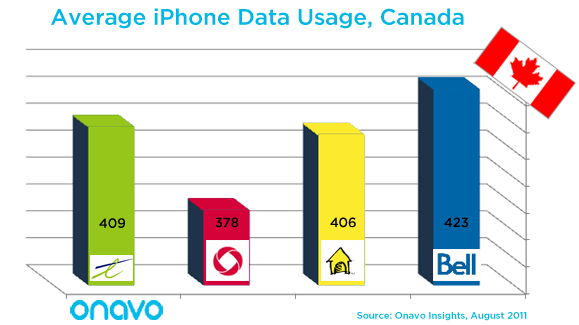 Back during the iPhone 3G announcement, Canadian wireless users were up in arms over the pricey and limited data allotment from Rogers. How much data do you use per month?