Ontario Sends Another Emergency Alert, Urges People to Stay Home Due to COVID-19 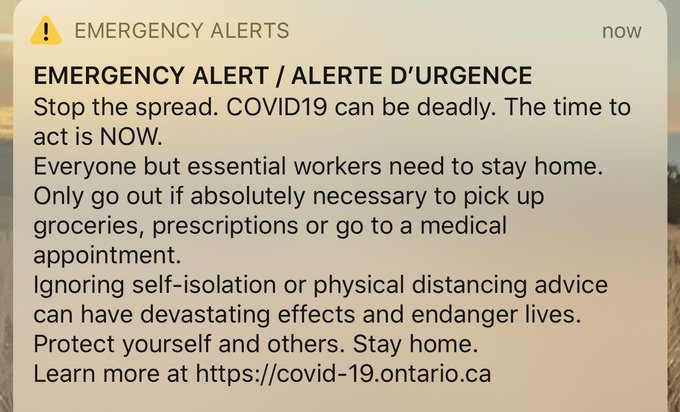 After sending out an emergency alert in late March urging people to stay home due to the COVID-19 pandemic, the Ontario government sent out its second alert yesterday.

“Stop the spread. COVID-19 can be deadly,” reads the wireless emergency alert, sent out just after 2PM local time in the province.

The message went on to read, “The time to act is NOW. Everyone but essential workers need to stay home. Only go out if absolutely necessary to pick up groceries, prescriptions, or go to a medical appointment. Ignoring self-isolation or physical distancing advice can have devastating effects and endanger lives. Protect yourself and others. Stay home.”

Those with wireless devices connected to LTE networks should have received the wireless emergency alert.

People nationwide are being urged to stay home to ‘help flatten the curve’, which is also the same message the federal government has been using the Apple App Store to promote as of yesterday.