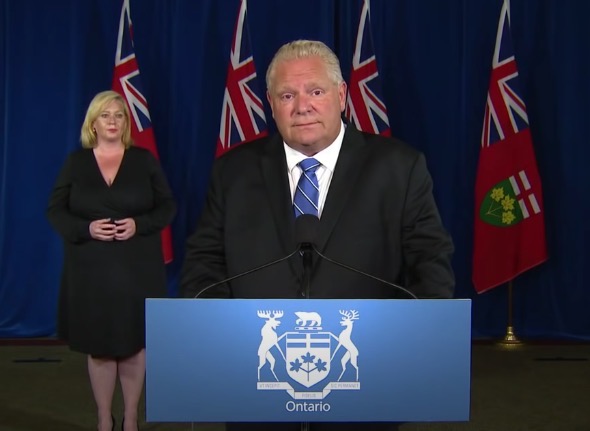 During Ontario Premier Doug Ford’s press conference today at Queen’s Park, the leader of the province hinted the current cellphone ban in schools may be lifted, in order to allow for exposure notifications with the COVID Alert iOS and Android app (via Narcity).

Ford was asked a follow-up question by reporter Lucas Meyer from Newstalk 1010, whether the province would lift the current cellphone ban to allow for more accurate readings when it comes to the COVID Alert app.

In response, Ford said, “we can look into that.” The premier added, “I understand when you put these apps out not everyone’s gonna upload ‘em”. But Ford reiterated even if a “small percentage” of people download and install COVID Alert, it will help the health system “tremendously”, to track down someone who has been diagnosed with COVID-19.

Ford said it was a “no brainer” for people to download and installed COVID Alert if they can to make contact tracing easier for the province.

Back in November, Ontario banned cellphones in classrooms for non-educational use. Students are able to use their smartphones for educational, health or special needs use only. But social media apps and texting are out of the question.

“When in class, students should be focused on their studies, not their social media,” said Stephen Lecce, Minister of Education, back in August 2019. “That’s why we are restricting cellphones and other personal mobile devices in the classroom, while making sure technology is available to help students achieve success in the digital economy and modern workforce.”

COVID Alert launched last Friday for iOS and Android, available for all Canadians to download. The app so far is only supported by health authorities in Ontario, but Atlantic Canada is apparently next to support the exposure notification app, based on Apple and Google’s API to allow anonymous Bluetooth “handshakes” in the system background. If a user tests positive for COVID-19, they can decide to share their diagnosis anonymously and allow others that were in contact to be notified of potential exposure to coronavirus.