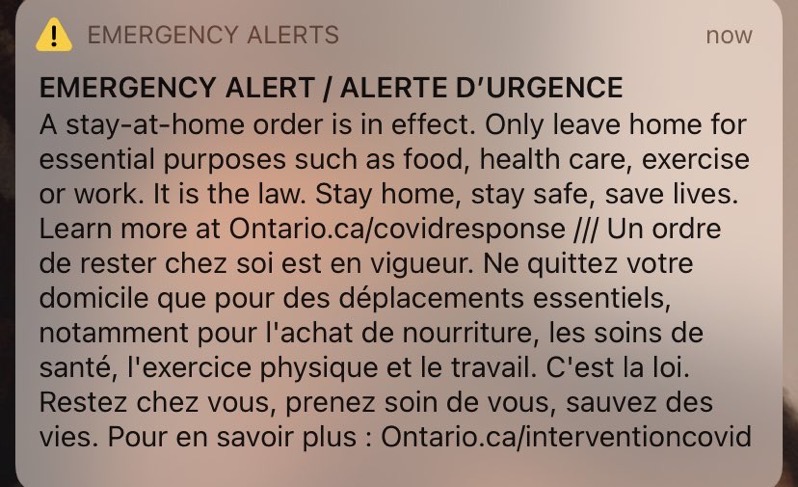 Ontario has sent out a wireless emergency alert, reminding residents in the province of the ongoing COVID-19 stay-at-home order that’s in effect.

“A stay-at-home order is in effect. Only leave home for essential purposes such as food, health care, exercise or work. It is the law. Stay home, stay safe, save lives. Learn more at Ontario.ca/covidresponse,” reads the alert, in both English and French.

Emergency alert.. That awkward moment when it's "the law" but starbies is still open 🤨 #ontariolockdown pic.twitter.com/MDAZb7LvDe

so the emergency alert is rly gonna scare the shit out of me just to tell me what i already knew 😭😭 pic.twitter.com/Lol16gDjoQ

Some people were not happy about the COVID-19 message sent out via the emergency alert system, usually reserved for Amber alerts or natural disasters.

Quebec similarly sent out an emergency wireless alert for COVID-19 recently, reiterating the province’s nightly curfew, which requires residents to stay home from 8pm to 5am.

Did you get this wireless alert on your smartphone in Ontario?