In a redesigned version of Microsoft’s Outlook app for iOS released today, the company has added a new and intelligent search feature powered by Microsoft Graph, in addition to other changes to navigation and conversations. According to TechCrunch, Microsoft Graph is a technology used to make productivity applications smarter, and Microsoft is using it in Outlook to search more than just emails. 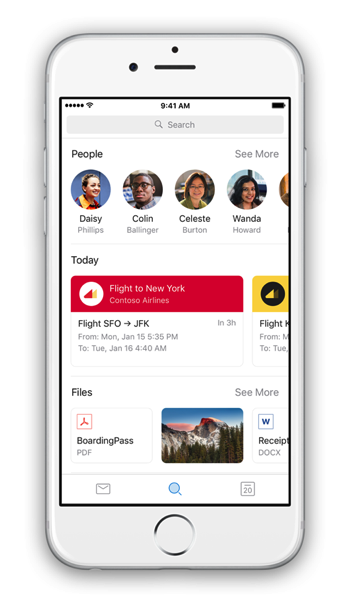 Microsoft wants to augment Outlook’s new search tool to include things like contacts, attachments, flight and travel itineraries, package deliveries and more. “Search is becoming a more central part of the experience in the new version of Outlook”, said Microsoft.

When you tap into search in the updated Outlook app, you will see “proactive suggestions” of your top contacts and recent files, as well as highlights of things happening today, like your travel plans, and much more.

Unfortunately, this intelligent search upgrade – while a part of the larger Outlook makeover – isn’t immediately available. Instead, the update will roll out “soon” to mobile users, says Microsoft, though it did not give an exact launch date.

However, there are a few more changes that are beginning to roll out today. For starters, the conversation experience has been redesigned. There’s now a clear separation between individual emails, which is a plus, as it makes it easier to visually parse your group conversations and get caught up. Also, Outlook will now automatically open conversations to the first unread message, to save you on scrolling down.

The changes to conversations and the navigation are starting to roll out today to Outlook for iOS users with Outlook.com and Gmail accounts, with support for Office 365 accounts coming soon as well.

In response to the feedback and guidance it received, Apple has announced that its child sexual abuse material (CSAM) detection tool for iCloud photos has now been permanently dropped, Wired is reporting. Apple has been delaying its CSAM detection features amid widespread criticism from privacy and security researchers and digital rights groups who were concerned...
Usman Qureshi
32 mins ago