Apple updated its list of medical partners ahead of a speech today by its Clinical and Health Informatics Lead Ricky Bloomfield, M.D at the ONC’s 2nd Interoperability Forum, revealing that over 75 different health institutions are now supporting the iOS Health Records feature, up from only 12 earlier this year (via VentureBeat). 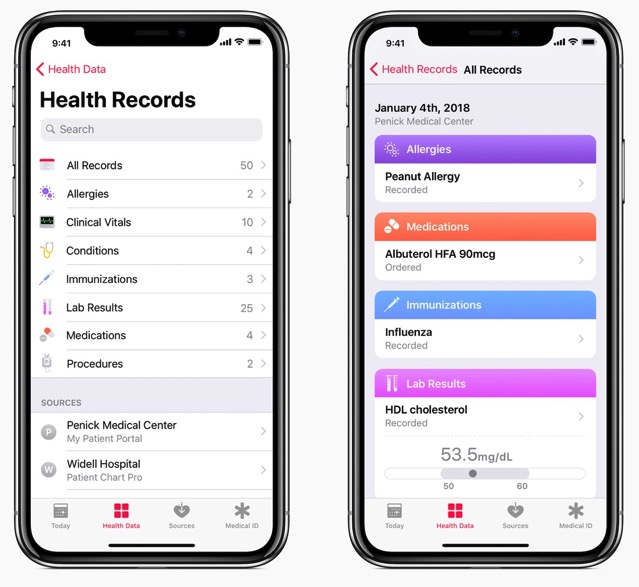 As of this month, the Apple’s health records initiative is supported by 77 health systems representing hundreds of hospitals and clinics across the United States. Bloomfield said that Apple opted to support an open health data-sharing standard called Fast Healthcare Interoperability Resources (FHIR) that notably won’t be final until the end of this year.

He explained that FHIR aggregates a patient’s health data from multiple sources, then makes it easy for the user to store, view, and share the data.

“You as a user have complete control over who has access to the data,” explained Bloomfield. “If you don’t want to share it, it won’t be shared. It stays private on your device until you decide to share it.” Bloomfield also said that Apple specifically selected the narrower Argonaut implementation of FHIR because it’s easier to use and will encourage greater adoption by medical providers.

On the viewing side, iOS users are able to use the Health app to see both the raw data that’s been transmitted and simple graphics that quickly illustrate whether a specific result is in or out of a proper range.

Apple previewed the Health Records feature for the first time alongside the beta version of iOS 11.3 earlier this year, noting that the feature was in testing with a dozen primarily coastal and Midwestern U.S. health systems. In June, the company opened its Health Records API to let developers build apps with health history support.

In response to the feedback and guidance it received, Apple has announced that its child sexual abuse material (CSAM) detection tool for iCloud photos has now been permanently dropped, Wired is reporting. Apple has been delaying its CSAM detection features amid widespread criticism from privacy and security researchers and digital rights groups who were concerned...
Usman Qureshi
33 mins ago