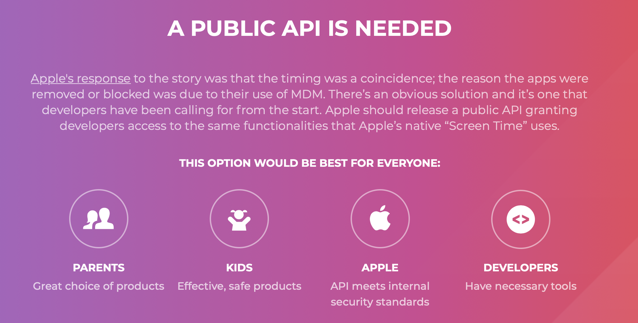 The developers claim on their website that when Apple released its own screen time management tool, “it also started removing established brands from the store or blocking updates to their apps.” They say that the only solution to this is for Apple to release a public API granting developers access to the same functionalities that Apple’s native “Screen Time” uses.

In their proposed API, the developers are calling for at least one of the following:

Here’s what they say:

The API proposal presented here outlines the functionality required to develop effective screen time management tools. It was developed by a group of leading parental control providers. It allows developers to create apps that go beyond iOS Screen Time functionality, to address parental concerns about social media use, child privacy, effective content filtering across all browsers and apps and more. This encourages developer innovation and helps Apple to back up their claim that “competition makes everything better and results in the best apps for our customers”.

Apple has not yet released any statement regarding the matter.