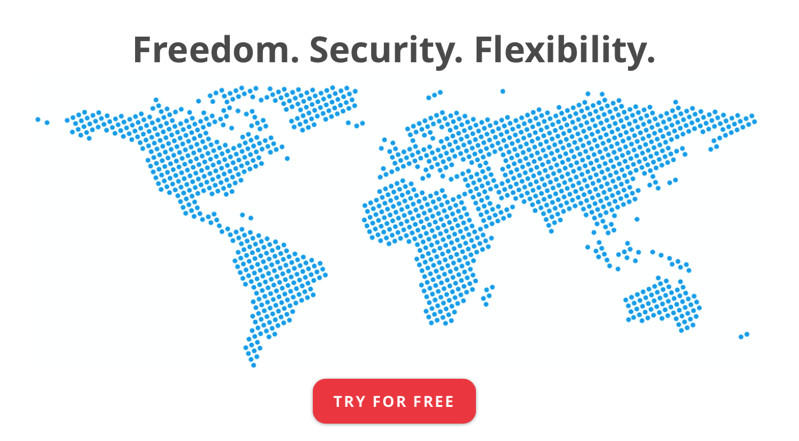 Canadian VPN and DNS service provider UnoTelly has sent out a letter to customers informing them about PayPal’s move to sever the payment processing agreement unilaterally and without prior warning.

You can see an email UnoTelly has been sending to customers, as noted by iPhone in Canada reader Keith: 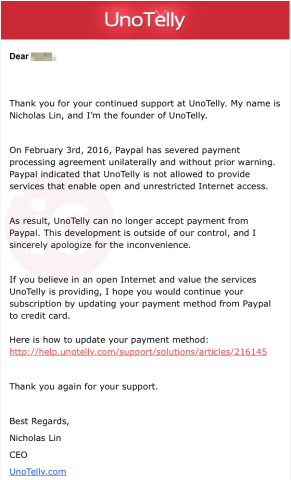 Also, PayPal has indicated that UnoTelly is not allowed to provide a service that enables open and unrestricted Internet access, the blog post penned by the service provider’s team reads.

As a result of PayPal’s unanticipated move, customers have been instructed to switch to credit card payments, since UnoTelly cannot accept payment from PayPal.

Both the blog post and the letter to customers emphasizes UnoTelly’s strong belief in an open Internet.

“We are disappointed at PayPal’s unilateral action and the way it acted without prior warning. We provide both DNS resolution and secure VPN services. Our services are network relays that connect people around the world,” UnoTelly’s Nicholas Lin said in a interview with TorrentFreak.

Alongside the inconvenient announcement, the UnoTelly team has teased that new products are coming in the next few months.

If you are a UnoTelly Customer, you can update your payment method by following this link. If you’d like to keep PayPal as a payment method, you might consider switching to PureVPN or ZenMate’s Lifetime VPN offer in our Deals Store.

Many Canadians utilize VPN and DNS services to access Netflix libraries and other streaming content made only available outside Canada due to licensing agreements. Netflix previously stated they had plans to clamp down on proxy access, but this move looks like it’s hitting VPN service providers hard.