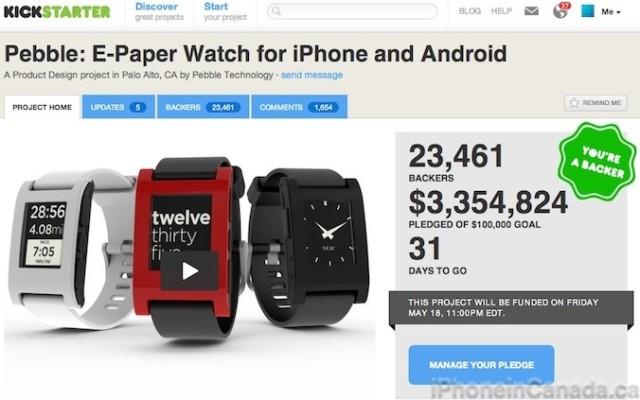 The Pebble e-paper watch has made Kickstarter history as the most funded project ever, surpassing $3.3 million dollars in pledges with still 31 days to go. We told you about the project prior to it hitting $1 million in under 30 hours. The project clearly shows that innovation is rewarded on Kickstarter.

Here’s an email sent out by the Pebble Team to its backers (including yours truly):

We are the most funded Kickstarter project ever thanks to you! The Pebble team and I really appreciate your commitment and backing. It’s been an incredible couple of days and we’re amazed at how many people share our vision. We’re working extremely hard to produce the best Pebble we can.

On a side note:
1. We are trying our very best to answer your private messages. We appreciate your patience.
2. Please continue to post in the comments section! We are keenly reading all your ideas and suggestions.

Rahul + rest of the Pebble Team 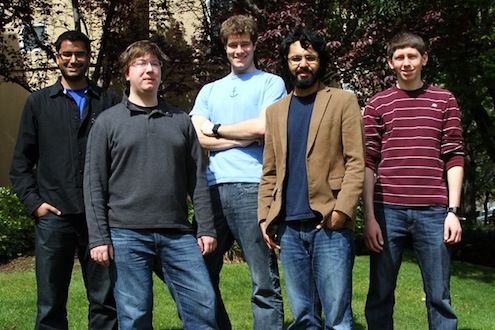 The Pebble Team has its origins in Canada. Co-Founder Eric Migicovsky was born in Vancouver, went to high school here and then went off to the University of Waterloo. His company now resides in Palo Alto, California. There’s a really great Q&A the Pebble team did with Wired, here’s a sample from the interview with Eric:

Wired: Are you surprised by the reception to Pebble? What were you hoping for when you launched on Kickstarter?

Migicovsky: We were expecting $100,000 over a month, so when it came in two hours, it was a surprise. On Thursday, we were earning $80,000 an hour. By Sunday morning, we passed the Wasteland 2, which was the second most popular Kickstarter after Double Fine Adventures.

Over at the Vancouver Sun, tech reporter Gillian Shaw’s interview with the Pebble team reveals the design of the Pebble watch comes from Vancouver industrial designer, Steve Johns:

“We wanted it to be thin, casual and sexy, but also sporty as well,” said Johns, who also designed the inPulse.

The idea was not to make a techie device appealing to only to geeks, but to draw on the traditions of conventional watches.

“I tried desperately to get the techie-ness out of the product. … it is under-standing that simplicity is important,” said Johns.

The Pebble team definitely did their homework with this product, and the immense response to the project is evidence of this. The watch surpassed the previous Kickstarter record holder, the gaming project Double Fine Adventure which reached $3.33 million in funding.

Are you a backer of the Pebble e-paper watch? I’m predicting this project could surpass $5 million+ by the end of the funding period. What’s your guess?