The Pen Addict Reviews the Apple Pencil for iPad Pro

A comprehensive review of the Apple Pencil published today by Myke Hurley at The Pen Addict, highlights some very interesting points about the iPad Pro stylus which aren’t mentioned anywhere else, as noted by MacStories, offering great examples of actual handwriting on iPad using the Apple Pencil (see below). 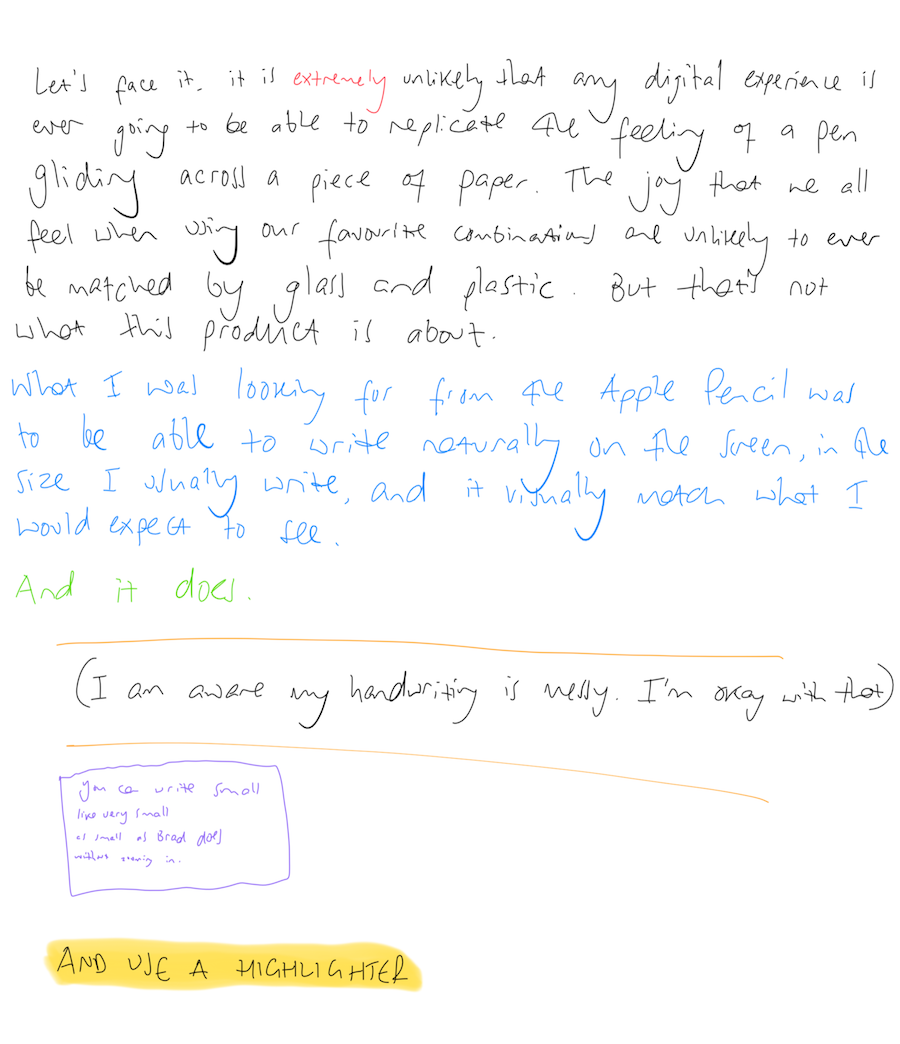 Hurley points out that while the Pencil is heavier than he had imagined it would be, the weights inside it are there to solve two problems. They are magnetic, so this gives you the ability to place your Pencil on the edge of the iPad (where the magnets are for the Smart Cover to attach), and have it hold in place. The second issue these weights attempt to solve is to stop your Pencil rolling off your desk. Here’s how he explains it:

The Pencil is completely cylindrical – there are no flat edges and no clip – so it’s prone to fall victim to gravity and non-level work spaces. But with the weights inside the Pencil, as soon as you set it down, it rolls a little and then stops itself. The weights appear to have been designed to balance it and take over. In most instances this works out great, but I have observed that if you place the Pencil down with any force, say if it is not gently put down on a desk, but maybe dropped from a few inches (I love my implements, but I use them too…), the Pencil will likely roll a couple of times in the process.

Check out the full review at this link. It’s a pretty good read.

Apple is reportedly scrapping its initial plans to increase iPhone production this year due to lower-than-expected demand. Following the launch of its new flagship, the iPhone 14 series, Apple is now reconsidering the scaling of its production. As reported by Bloomberg, Apple has reached out to its supply chain partners. Initially, the Cupertino company is...
Steve Vegvari
13 mins ago

Logitech is launching a brand new line of 'Designed for Mac' keyboards and mice. The announced products are specifically aimed at servicing Logitech's Apple users. The lineup of 'Designed for Mac' devices includes the MX Mechanical Mini for Mac Keyboard. This keyboard offers the traditional Mac layout. It features backlit keys and is USB-C rechargeable....
Steve Vegvari
58 mins ago