Some major changes are coming to the App Store, explains Apple SVP of worldwide marketing Phil Schiller, detailing the upcoming changes to Canadian Jim Dalrymple from The Loop.

Regarding the app review process, times are much faster now, moving from five days to now just one day for many apps. “We’re never going to get rid of that [app review] because it matters,” said Schiller.

Apple reviews nearly 100,000 apps per week and new processes have been created to streamline the process while maintaining quality customers expect, he said. The results speak for themselves, as now Apple has a rate of reviewing 50% of apps in 24 hours, while 90% of apps in 48 hours.

As for the App Store, the company has decided to open up its subscription model to all categories, not just news apps. Companies will now have the option of getting customers to subscribe to value offers to all apps they create, instead of just one.

Moreover, new changes to revenue share in the second year of individual subscriptions will see it move to 85-15, favouring developers, applied to all existing apps and subscribers, not just new apps, starting June 13, 2016.

As for customers, they gain the ability to upgrade, downgrade or side grade subscriptions. Developers will also be able to charge existing customers one price, but have new customers charge a different price. Update: Apple explains there will be a 60-day grace period when users unsubscribe, allowing them to re-subscribe at the discounted rate within the grace period.

The biggest changes coming will be related to App Discovery, as Schiller says “We want our customers to have a reason to come to the App Store every day.”

The App Store’s “Featured” section will soon only show apps you don’t already have installed on your device, while the Categories tab is returning, to make it easier to browse apps.

There will soon be an easier way to share apps with friends thanks to 3D Touch. Users will be able to 3D Touch on an app on the home screen, to bring up a Share sheet, allowing quick sharing to social networks and contacts.

But one huge change coming—is the ability for developers to place ads in search.

“Our store is not for sale—that’s not how we handle things,” said Schiller. “We are only going to do this if we can, first and foremost, respect the user and be fair to developers, especially small developers.” 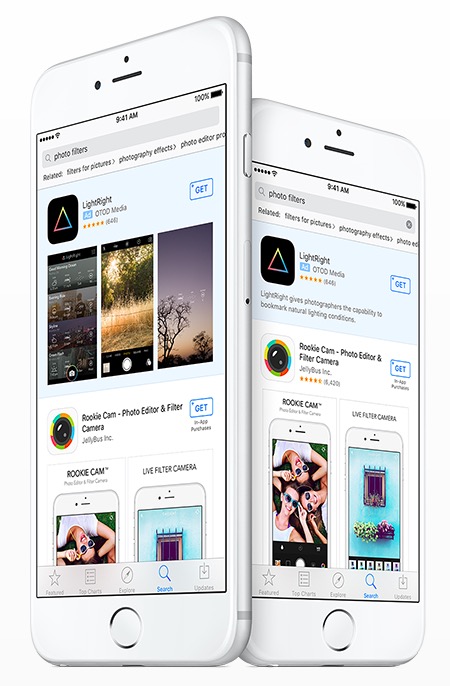 Apple says only one ad will appear on search results pages, clearly indicated as an ad, with content being pulled from the app’s info on the App Store, which will prevent spammy ads. Only existing approved app developers can place a search ad, to prevent third-parties from flogging their wares.

Developers will place ads through an auction system, with no minimums and no exclusives, to make a level playing field, even for small developers to participate as well. The beta of this ad system will debut this summer, and first launch in the U.S. when it comes out of beta.

Privacy is also important regarding search ads, as Apple says users will not be tracked and user data and clicks won’t be shared with developers, who will only get reports. Ads will not be served to those 13 and under, if Apple is able to determine this by device.

These are some pretty big changes coming to the App Store, and are long overdue. Can’t wait to see how developers respond to these changes.

Moreover, it’s interesting Apple is pre-announcing these ahead of next week’s WWDC, in a rare move with select media outlets first (The Verge also interviewed Schiller). This will allow the company to save stage time and stick their typical two-hour presentation window.

The WWDC keynote will take place Monday, June 13th at 10AM PDT/1PM EDT. We’ll be providing coverage for you all day (err day), as always.