Adobe this morning announced beta versions of its flagship Photoshop application that run on Apple Silicon-based Macs and Windows 10 on ARM. 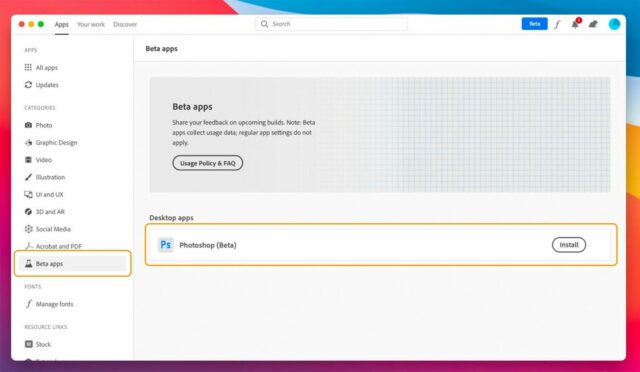 In a post, Adobe said that Photoshop is running natively on Apple’s M1 processor. The beta release isn’t officially supported but is available to gather feedback.

“This early version of Photoshop for Apple Silicon offers many of the core Photoshop features that you’ve come to rely on for your day to day editing needs, and we’ll be adding more features in the weeks to come,” reads the post. “Note that Beta software is not officially supported yet by Adobe, but we want to hear from you, and this is the place to let us know how it’s going.”

Apple’s transition to its own Apple Silicon and away from Intel will pick up speed as more third-party software providers build natively on the ARM processors. Adobe is clearly one of the leading software providers for the Mac. Microsoft is using Rosetta 2 to translate its Intel-based Office for ARM for now.

Adobe also released the first beta build of Photoshop for Windows 10 on ARM, bringing with it native support for ARM64 versions of Windows 10 that runs on devices like the Surface Pro X.

“This early version of Photoshop for ARM offers many of the core Photoshop features that you’ve come to rely on for your day to day editing needs, and we’ll be adding more features in the weeks to come,” Adobe says of the Windows 10 on ARM version.

In both cases, Adobe notes that these versions of Photoshop are not “fully functioning” as they “contain several limitations compared to the more widely available versions” of Photoshop for Windows and Mac. “Over time, more features will be made available.”

SpaceX has delayed the implementation of a new Fair Use policy on Starlink connections in Canada and the U.S. to February 2023, according to an update on the company's website (via Tesla North). The policy, which will institute data caps on Priority Access usage for all Starlink Residential customers in Canada and the U.S. and...
Nehal Malik
3 seconds ago