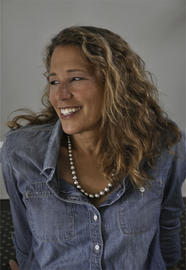 Pinterest has today announced that it has hired creative professional and former Apple veteran Susan Kare as a product design lead. According to ZDNet, the startup has specifically highlighted Kare’s portfolio of work from Apple, describing her as “the pioneer behind iconic designs like the original Macintosh icons Lasso, the Grabber, and the Paint Bucket, and the first typefaces like Chicago”.

“Kare demonstrated loyalty to Apple co-founder Steve Jobs by following him to his now-defunct software company NeXt, where as creative director she became the 10th employee. Kare eventually founded her own agency, Susan Kare Design, which went on to produce some familiar prints, such as Microsoft’s Solitaire cards and Facebook’s virtual gifts.

At Pinterest — where she actually started officially earlier this week — Kare will be one of the Creative team leads responsible for the digital scrapbooking platform’s interface.”

The source notes that Kare will reporting to Pinterest’s head of product design and also Apple veteran Bob Baxley. Pinterest has also recently publishing its hiring goals for 2016 to boost diversity for women and minorities, especially in engineering roles.

The San Francisco-based startup is said to boost hiring rates for full-time engineers to at least 30% female and eight% from underrepresented ethnic backgrounds.

Streaming service FuboTV announced on Wednesday it has launched three Disney channels within its Premium package. Available now are the Disney Channel, Disney Junior and Disney XD. According to FuboTV, these new Disney channels are part of the company’s partnership with STACKTV, which began last year and added Global, HGTV Canada, Food Network Canada, W Network, […]
Gary Ng
12 mins ago

Netflix has made good on its warning of an impending crackdown on account password sharing in early 2023, explaining its new rules in a Help Center article (via The Streamable). According to Netflix's estimates, more than 100 million users across the globe use another person's Netflix account to access the service. Netflix hopes that implementing...
Nehal Malik
39 mins ago