The first company to support Apple’s CarPlay is Pioneer, as it announced the addition of this feature to five in-dash multimedia receivers. With this hardware, a limited number of iPhone users (CarPlay is compatible only with iPhones that feature a Lightning port) can bring the iOS experience to the car they already own. 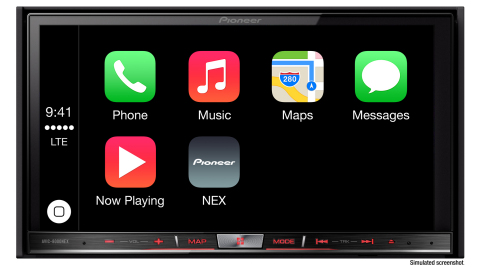 “CarPlay enriches the iPhone experience in the vehicle by providing a safer way to access the iPhone features they want to use most while driving,” said Ted Cardenas, vice president of marketing for the Car Electronics Division of Pioneer Electronics (USA) Inc. “With Pioneer’s implementation, CarPlay can now be integrated into millions of vehicles already on the road.”

CarPlay is also compatible with the new AppRadio 4, which features a high-resolution, 6.2-inch WVGA touchscreen.

As previously announced, have Pioneer enabled CarPlay compatibility with a firmware update, which the manufacturer pushed out yesterday. Current NEX owners can download the firmware onto a USB memory stick and connect it to the receiver’s USB cable input.

It's confirmed that Rihanna will headline next year's Super Bowl LVLL Halftime show. 2023's mega-sporting event will be the first to see Apple Music take over as the official sponsor of the halftime show as Pepsi exits its deal. The news was confirmed via social media where Apple Music, Rihanna, and the NFL all confirmed...
Steve Vegvari
38 mins ago