After Apple removed a crowdsourced mapping app used by protestors as well as the Quartz’s news app from the App Store, it is now Google’s turn to crack down on Hong Kong-related apps, starting with a game called The Revolution of Our Times that has now been permanently pulled from the Play Store (via The Verge). 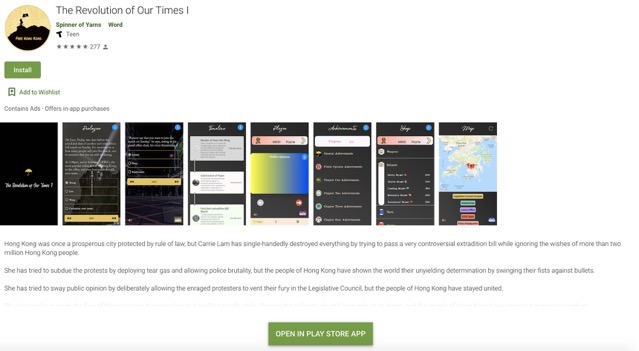 A Google spokesperson has told The Wall Street Journal the game was removed due to a Play Store policy that bans “capitalizing on sensitive events such as attempting to make money from serious ongoing conflicts or tragedies through a game.”

Unlike Apple’s recent App Store bans of HKmap.live and Quartz’s news app, Google’s takedown feels more in line with regular app store enforcement, although the rule leaves plenty of room for interpretation. For example, who decides what counts as “capitalizing on sensitive events”?

As events in Hong Kong continue to progress, with more and more companies drawn into the conflict, expect even more eyes to be on Apple and Google.

2022 was the worst year for the global smartphone market since 2013, with shipments dropping 11.3% in the year to 1.21 billion units and 18.3% in the fourth quarter alone, according to preliminary data from the International Data Corporation (IDC). While Samsung led global smartphone shipments for 2022, Apple came in second place with 226.4...
Nehal Malik
56 mins ago