Sony has just revealed its PlayStation Now games lineup for July 2021, which includes the Western epic Red Dead Redemption 2, intense yokai action in the form of Nioh 2, and Judgment, which serves up a compelling psychological thriller. 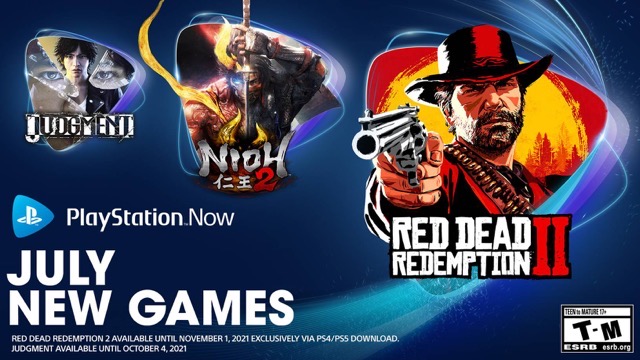 Also joining the lineup this month is God of War, Moving Out, Olympic Games Tokyo 2020, and Nascar Heat 5. All these games join PlayStation Now tomorrow, July 6.

From the creators of Grand Theft Auto V and Red Dead Redemption, Red Dead Redemption 2 is a sprawling tale of life in America at the dawn of the modern age. After a robbery goes badly wrong in the western town of Blackwater, Arthur Morgan and the Van der Linde gang are forced to flee.

Master the lethal arts of the samurai as a mysterious half-human, half-supernatural Yokai warrior, in this challenging action RPG sequel. Explore violent Sengoku-era Japan and the deadly Dark Realm, both plagued with grotesque, merciless demons.

Moving Out is a ridiculous physics-based moving simulator. Play solo or co-op and move your way through sleepy suburbs, frenzied farms, haunted houses, virtual reality and lands beyond!

This staggering reimagining of God of War combines all the hallmarks of the iconic series – epic boss fights, fluid combat, and breathtaking scale – and fuses them with a powerful and moving narrative that re-establishes Kratos’ world.

From the team that brought you the critically-acclaimed Yakuza series comes a gripping psychological thriller. Haunted by his past, disgraced attorney Takayuki Yagami takes up arms as a private detective, clawing his way through Kamurocho’s underground crime network to investigate a string of grisly murders.