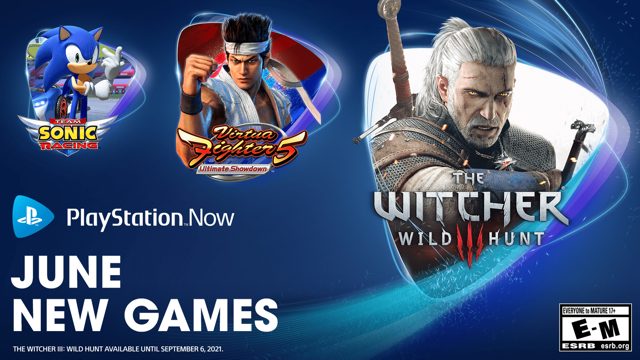 The Witcher 3: Wild Hunt – Game of the Year Edition

Play as a professional monster hunter tasked with finding a child of prophecy in a vast open world rich with merchant cities, dangerous mountain passes, and forgotten caverns to explore. The Game of the Year Edition includes The Witcher 3: Wild Hunt, all 16 DLCs, and two Expansion Packs: Hearts of Stone & Blood and Wine.

The Witcher 3: Wild Hunt is available on PlayStation Now until September 6, 2021.

This console exclusive allows both VF veterans and newcomers to experience the intense martial arts combat, deep strategy, and intricately balanced gameplay of the groundbreaking 3D fighter in stunning HD.

Card game fuses with roguelike in this acclaimed fantasy battler. With hundreds of cards to choose from to build your deck and ever-changing layouts and battles, every journey is unique as you attempt to ascend the Spire.

Slay the Spire is available on PlayStation Now until December 6, 2021.

Face-off with friends in intense multiplayer racing, race together across stunning worlds and work together as a team by sharing power-ups and speed boosts in Team Sonic Racing.

Sonic Mania lets you experience the ultimate celebration of past and future in this all-new 2D Sonic adventure running at a crisp 60FPS with stunning HD retro-style graphics. Multiple playable characters give you the ability to go explosively fast as Sonic, soar as Tails, or power through tough obstacles with Knuckles’ brute strength.

Defeat enemies with blazing speed as Modern Sonic, catapult past perilous platforms as Classic Sonic, and create your very own Custom Hero Character equipped with a variety of powerful gadgets in Sonic Forces.

Apple has officially launched sales of its new HomePod second-generation in Canada, with first pre-orders set to deliver today. As of writing, you can buy HomePod 2 on Apple’s website and have it ready for pickup at your local Apple Store. Select addresses can also get HomePod 2 with same-day delivery. HomePod 2 costs $399 […]
Gary Ng
54 mins ago