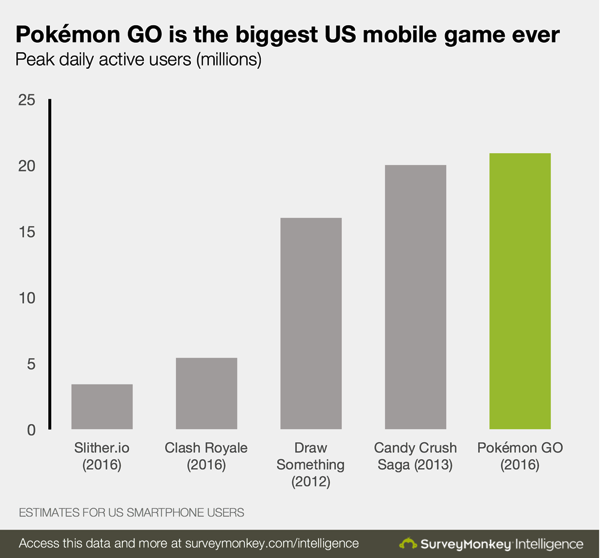 With people busy catching Pokémon in the most inappropriate places all over the world for the past one week, it’s no surprise that Nintendo’s internet-breaking Pokémon Go has already become the biggest mobile game in U.S. history, according to SurveyMonkey. As of yesterday, Pokémon Go had attracted nearly 21 million daily active users in the U.S., surpassing Candy Crush Saga’s record peak US smartphone audience of 20 million.

“We finally have numbers to support what you might have already guessed: Pokémon GO is the biggest mobile game in U.S. history. Shooting to the top of the app store on the day it was released, within 24 hours Pokémon GO beat out indie hit Slither.io and Supercell’s heavily promoted blockbuster Clash Royale to become the biggest game of 2016, as measured by daily active users.

And that’s not all. Within three days of its release, Pokémon GO attracted more users than Twitter, and rose to the top of the App Store revenue charts, earning millions of dollars a day for its publisher, Niantic.”

Furthermore, the game is already on track to pass Snapchat within a couple of days on Android, and could even surpass Google Maps itself as the largest user of Google’s mapping data.

Despite the game’s wild success,, it must however be noted that Nintendo only has a minority stake in Pokémon Go, and will pocket just a small slice of the game’s profits.