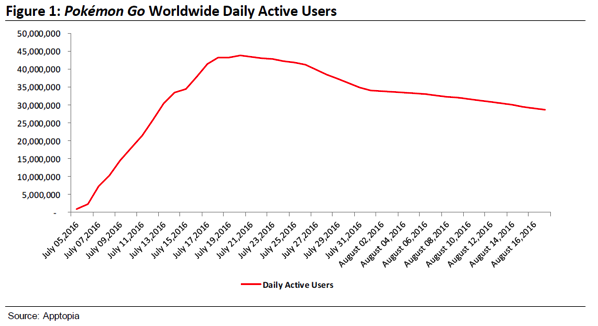 According to Axiom Capital Management, Pokémon Go usage has reached its peak and is already showing a decline (via Bloomberg). The smash-hit game’s daily active users, downloads, engagement, and time spent on the app per day are all well off their peaks and on a downward trend, as shown by latest data from Sensor Tower, SurveyMonkey, and Apptopia.

As such, investors and executives at Facebook Inc., Instagram, Tinder (Match Group Inc.), Twitter Inc., and Snapchat can breathe a sigh of relief, says Senior Analyst Victor Anthony. “Given the rapid rise in usage of the Pokémon Go app since the launch in July, investors have been concerned that this new user experience has been detracting from time spent on other mobile focused apps,” he writes.

“The declining trends should assuage investor concerns about the impact of Pokémon Go on time spent on the above named companies,” writes Anthony.

The analyst highlights that if these declines persist, they would not only affect the popularity of Pokemon Go, but augmented reality gaming in general as well. He also points out that Google Trends data is already showing declining interest in augmented reality, whereas interest in virtual reality remains high.

Have you lost interest in hunting Pokémon yet?