Citing newly obtained documents, a report by CBC News is claiming that Pokémon Go players trespassed on military bases in Canada in their pursuit of Pikachu following the game’s initial launch back in 2016. Soon after, the Canadian Armed Forces issued a public warning that Pokémon Go users should keep off the military property. 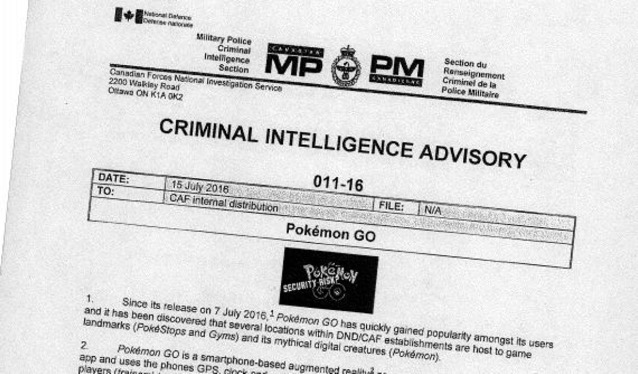 The documents, which are a part of the information recently made public by the Department of National Defence, also show that the Canadian military police issued a criminal intelligence advisory eight days after the game’s debut.

The notice was sent to all military police officers, saying “It has been discovered that several locations within DND/CAF establishments are host to game landmarks (PokeStops and Gyms) and its mythical digital creatures (Pokemon).”

Moreover, the military assigned at least three military police officers to search for virtual Pokemon infrastructure around their bases, while carrying their smartphones and notepads.

The documents show a wide variety of responses to the discovery of PokeStops and gyms on military bases. At CFB Petawawa, one location where Pokemon Go players retrieved virtual items was at the Garrison Museum.

“Maybe some extra people will visit the museum!” wrote Maj. Alicia Saucier. Officials at CFB North Bay were less enthusiastic. On July 21, 2016, they filed a complaint with Niantic, the developer of Pokemon Go.

“With the implementation of this PokeStop, there will be an increase in traffic onto the base, which could have a negative impact on 22 Wing’s Mission,” the request said. Niantic responded that it would review the complaint and follow up.

It took over three years for the Department of National Defence to provide the documents requested by CBC News.