Pope Francis’s used iPad has been sold for $30,500 in an auction this week in Uruguay, with the money benefiting a school for disadvantaged children, MarketWatch is reporting. According to the auctioneer Juan Castells, the winning bid came over the phone from an Argentine businessman who asked to remain anonymous. “I believe he is very Catholic,” Castells said. 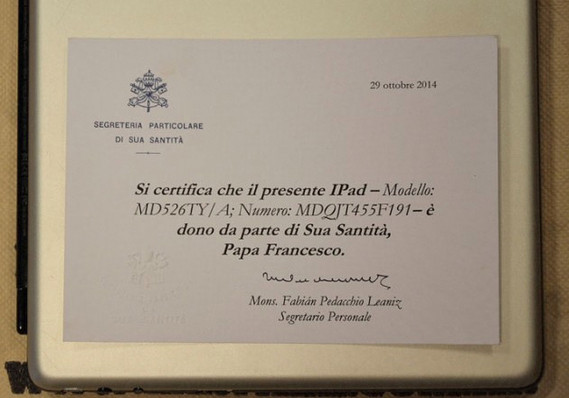 While declining to offer further details about the man‘s background or activities, the auctioneer added that he’s so well-known that even clues about his line of business would make it easy to identify him. The bidding started at $20,000 and was intense, Castells revealed. In the end, a Uruguayan businessman who also asked for anonymity, competed with the Argentine for the iPad.

“The iPad, engraved on its reverse side with the words “His Holiness Francis,” also came with a black Logitech keyboard and a certificate of authenticity. One of the priests involved with the future Uruguayan school knew the pope from his days as a prelate in Argentina, and that connection helped to secure the iPad as an auction item, Castells said”.

Last year, a Harley Davidson given to the pope and a leather jacket signed by him were sold at an auction in Paris for about $327,000 and $77,400, respectively.