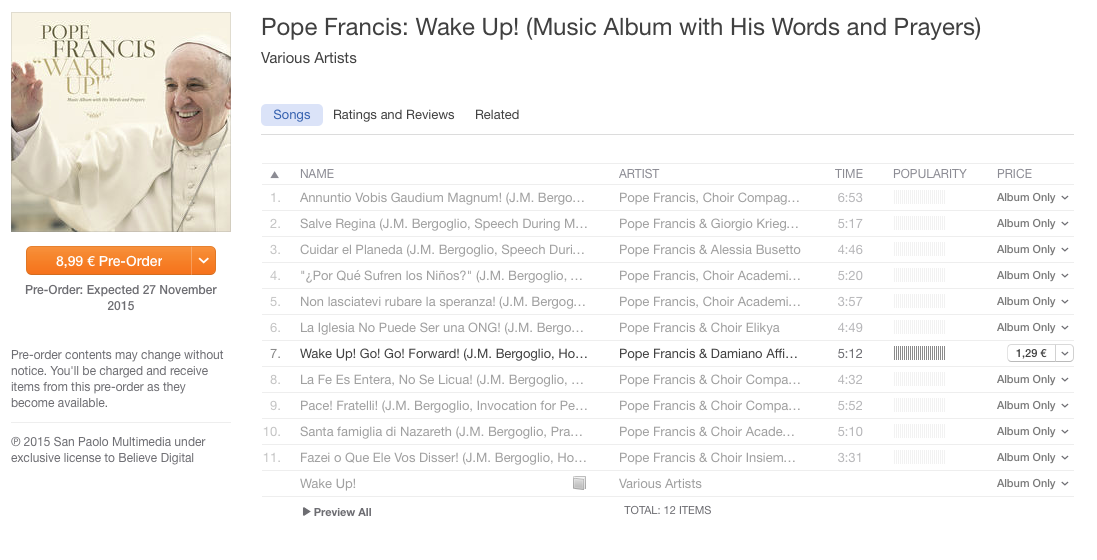 Pope Francis has a deeper connection with Apple than you may have thought: First, his US visit caused delays to iPhone 6s deliveries in NYC and Philadelphia, and today Rolling Stone reports that His Holiness will spread his message of hope, faith, and unity in the form of a prog-rock-infused album titled “Wake Up!”, which can be pre-ordered from Apple’s iTunes Store.

The album will be available on November 27, and you can already listen to the “Wake Up! Go! Go! Forward!” song on iTunes.

“For many years, I’ve been the producer and the artistic director of albums by the Pope. I had the honor to work with John Paul II, Benedict XVI and now Pope Francis,” Neroni tells Rolling Stone. “As in the past, for this album too, I tried to be strongly faithful to the pastoral and personality of Pope Francis: the Pope of dialogue, open doors, hospitality. For this reason, the voice of Pope Francis in Wake Up! dialogues music. And contemporary music (rock, pop, Latin etc.) dialogues with the Christian tradition of sacred hymns.”

Musician Tony Pagliuca, who composed several songs for the album, revealed to Rolling Stone that he was asked by Don Giulio Neuroni to collaborate on the CD, and he gladly accepted: “Putting my music in the service of the words and the voice of Pope Francis has been a fantastic experience and a very interesting artistic challenge,” he added.