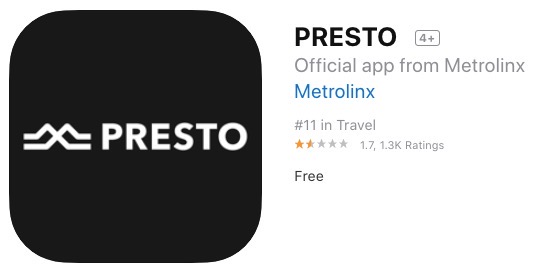 It’s been just over a year since the PRESTO app launched for iOS and Android users, allowing travellers in the Greater Toronto, Ottawa and Hamilton areas to reload balances and passes onto their phones.

So far, the app hasn’t fared very well in terms of reviews, seeing a 1.7 star out of 5 star rating on the App Store.

CityNews took an informal poll across social media and saw 74 percent of respondents say the app is not good enough, while 26 percent said it works well. Complaints were regarding the app being glitchy and slow updates for card balances.

The Android version of the app allowed for real-time card balance updates, since NFC access was made available. But at the iPhone app saw a 4 to 24 hour delay on reloading, as NFC access was unavailable to developers at the time.

But with Apple relaxing its NFC restrictions for developers, Metrolinx, which operates the PRESTO card, says they’re working on updating their iPhone app to support real-time balance updates.

“On the iPhone, NFC when it first launched, wasn’t available—but now we’re working on that. Some months ago they made it available for apps as well. Then you’ll have instant functions on both of them, I think that will make many people really happy.”

Aikins also was asked when riders can start using their smartphones to tap for fares, instead of using a PRESTO card. In response, she said new readers are coming to support tap payments from smartphones, which will first start with bank cards and credit cards, then eventually integration with the PRESTO card:

“Well we know people want that. We absolutely know people want that. You might be seeing new readers around and that will eventually have that function so that you can pay using your phones. I don’t have a timeline, because we have to roll this out and test new readers, and that sort of thing. But you’ll be able to first pay on your phone with your bank cards and credit cards, then eventually we’ll have your Presto card loaded as well. So it’ll be a phased approach and we’ll get there—we promise.”

Tap payments from a smartphone would most likely mean support for mobile wallets such as Apple Pay, Android Pay and Samsung Pay.

According to Metrolinx, the mobile app has been downloaded nearly one million times in just over a year.