Continuing its efforts to offer alternatives to Google’s key products, Swiss-based encrypted email service provider ProtonMail has just launched its new ProtonCalendar in public beta. Starting today, all ProtonMail users on a paid plan will be able to access ProtonCalendar (via VentureBeat). 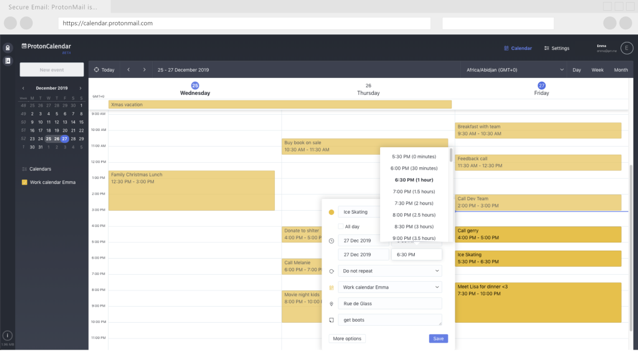 ProtonCalendar, which will be available to everyone when it exits beta in 2020, marks the beginning of a suite of new products that will include a cloud storage service to rival Google Drive as well as an office software similar to Google Docs.

“Our goal is to create and make widely accessible online products [that] serve users instead of exploiting them,” said ProtonMail CEO Andy Yen. “Like ProtonMail, ProtonCalendar is engineered to put user privacy first, and in that respect we are the polar opposite of Google,” Yen added.

Offering a clean interface with views by month and day, color-coded event types, and so on, ProtonCalendar is tied to a user’s ProtonMail email account:

Where ProtonMail is really looking to differentiate itself is by putting privacy at the heart of ProtonCalendar — the company said it encrypts event title, description, location, and participants so neither third parties nor ProtonMail itself can peruse the contents of calendar entries.