Sony has a brand-new VR headset coming for the PlayStation 5, and now we have our first glimpse of Sony’s PSVR 2 controllers. 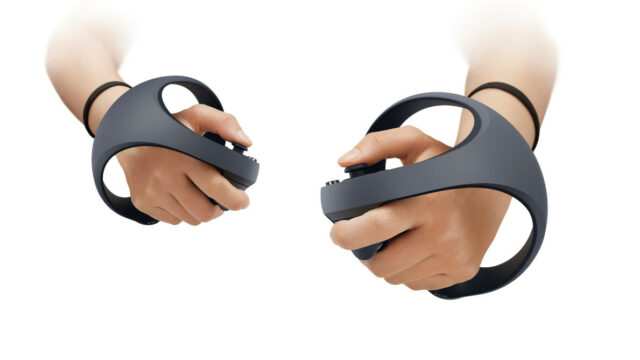 The new controllers are a 2-piece design, with matching pieces in each hand, and feature a spherical design with ergonomics being the highest priority. The controllers are designed with freedom of movement in mind, allowing game makers to have a lot of different possibilities for controller movement.

“Our new VR controller speaks to our mission of achieving a much deeper sense of presence and stronger feeling of immersion in VR experiences.” said Sony Senior VP Hideaki Nishino on PlayStation Blog. “It will build upon the innovation we introduced with the DualSense wireless controller, which changed how games ‘feel’ on PS5 by unlocking a new way to tap into the sense of touch. Now we’re bringing that innovation to VR gaming.”

Each VR controller (both left and right) will have adaptive triggers, like the ones found on the DualSense PlayStation controllers. Additionally, the controllers will offer haptic feedback, making every encounter in a VR world unique and exciting.

Sony says its new headset will have built-in motion tracking, instead of requiring a camera, that will detect a “tracking ring” positioned on the bottom of the controllers, so motion tracking should be more accurate and easier to set up with one less component to worry about.

In February, Sony revealed the first details about its PlayStation VR platform but noted no new hardware would launch this year. Sony currently boasts a PS VR headset for the PlayStation 4 and PS5.

Sony launched its original PS VR headset five years ago during a time when interest in virtual reality surged. After dropping due to high prices and complicated setups, VR has seen a resurgence in interest fueled by headsets like Oculus Quest, which are more affordable and don’t require a PC or home console to operate.