Looks like we continue to see further purported images of next generation ‘iPhone 5’ parts. Once again, NoWhereElse.fr points out some images of the alleged logic board for the next iPhone, as discovered over at the Chinese forums Weiphone.com. The logic board houses the main components of the iPhone, such as the AX processor, RF transceiver, SIM card slot, touchscreen controller, gyroscope, accelerometer and more. 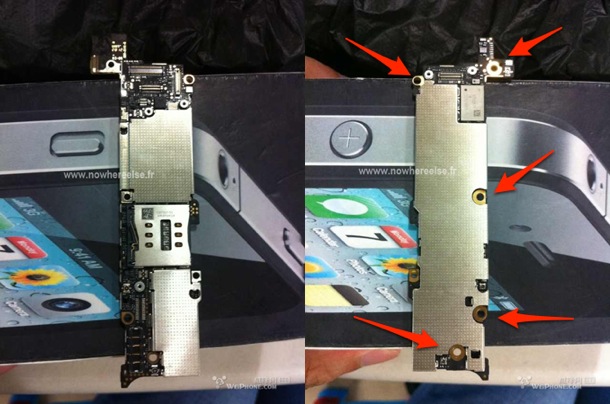 Even with the EMI shields attached, this logic board appears to have the ‘perfect fit’ based on the five attachment points of the infamous ‘leaked’ iPhone 5 shell. NoWhereElse.fr points out in the following image of the uncanny fit into the two-toned shell (it’s part of the animated .GIF they created):

Below is the iPhone 4S logic board, courtesy of iFixit for comparisons sake:

What do you think? Does this latest ‘leak’ bring legitimacy to the next iPhone’s apparent thinner and taller design? The parts we’ve seen surfacing could be part of a prototype, or it could be the real deal. We’ll find out soon enough when Apple announces the ‘iPhone 5’ on September 12th.