Since July 23rd, smartwatch and wearables maker Garmin has shut down several of its services to deal with a ransomware attack that has not only encrypted its internal network but has also forced it to shut down some production systems, ZDNet is reporting. 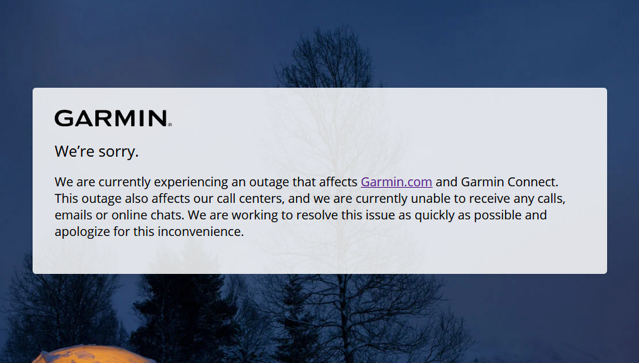 Garmin’s official website, the Garmin Connect user data-syncing service, Garmin’s aviation database services, and even some production lines in Asia are all currently under multi-day maintenance.

Moreover, Garmin has informed its users on Twitter that the same outage has also impacted its call centers, leaving the company in the situation of being unable to answer calls, emails, and online chats.

This outage also affects our call centers, and we are currently unable to receive any calls, emails or online chats. We are working to resolve this issue as quickly as possible and apologize for this inconvenience. (2/2)

In addition to consumer wearables and sportswear, flyGarmin, the company’s web service that supports its line of aviation navigational equipment, has also been down today.

“Pilots have told ZDNet today that they haven’t been able to download a version of Garmin’s aviation database on their Garmin airplane navigational systems. Pilots need to run an up-to-date version of this database on their navigation devices as an FAA requirement. Furthermore, the Garmin Pilot app, which they use to schedule and plan flights, was also down today, causing additional headaches.”

Meanwhile, a Garmin spokesperson has declined to confirm that the outage was caused by a ransomware attack, citing an ongoing investigation.