RBC has announced free credit scores for all online banking customers, as the bank has partnered with TransUnion for the reports. Also available is a CreditView Dashboard, which lets online banking clients see their credit history, along with a new “first for Canada”—a digital simulator to see how your credit is affected by various financial scenarios you input. 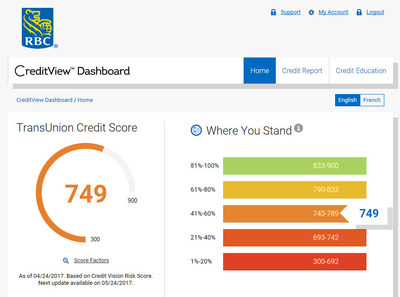 “We want all of our clients to succeed, and the key to success is providing as much knowledge and transparency as we can – all at their fingertips,” said John McNain, vice-president, Personal Lending, in a press release. “Credit scores are a tricky concept to grasp, and this is one of those times we don’t want our clients to learn from their mistakes. CreditView Dashboard and our digital simulator help clients understand how credit works for them and more importantly, how to improve it.”

There’s no word whether RBC will implement this feature into their iOS banking app. Back in June, CIBC launched free credit scores with Equifax for their mobile banking customers, so there is a chance RBC may follow suit.