Canadian banks are embracing financial technology, but there are two lenders who are the most active in the area: Royal Bank of Canada (RBC) and Bank of Nova Scotia, according to a new report from the International Data Corporation (IDC). 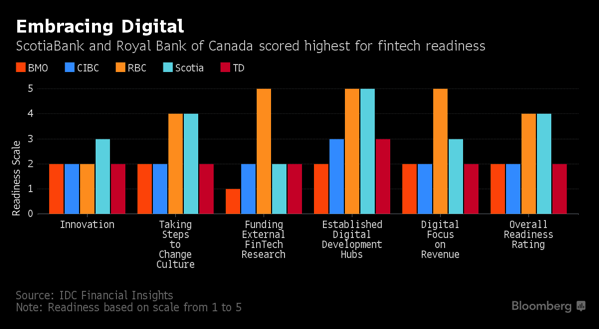 TD responded to Bloomberg to say it hasn’t seen the IDC report, but did mention it has 11 million digital and 5.9 million mobile customers across North America, while also ranked first among Canadian financial services in mobile engagement according to ComScore.

RBC, Canada’s biggest lender by assets, has increased spending on artificial intelligence and machine learning, as the CEO of the bank sees these technologies as the most transformative for this industry.

Big banks are facing disruption from ‘fintech’ companies, as robo-advisors such as Wealthsimple take away online investing from incumbents. BMO launched their own robo-advising service called SmartFolio to compete with fintech companies.

Uber is getting back into the robotaxi business. Not long after selling off its autonomous vehicle research division to a startup named Aurora, the transportation app is partnering with Motional. In a 10-year agreement, Uber will work with Motional to provide autonomous rides and deliveries. Based on the initial deal, Uber is utilizing Hyundai's autonomous...
Steve Vegvari
24 mins ago