Ahead of the highly anticipated season 4 premiere of Netflix’s Stranger Things this Friday, May 27, Reddit has partnered with the streaming video giant to introduce new limited-time custom avatars inspired by the hit show’s lead characters (via TechCrunch). 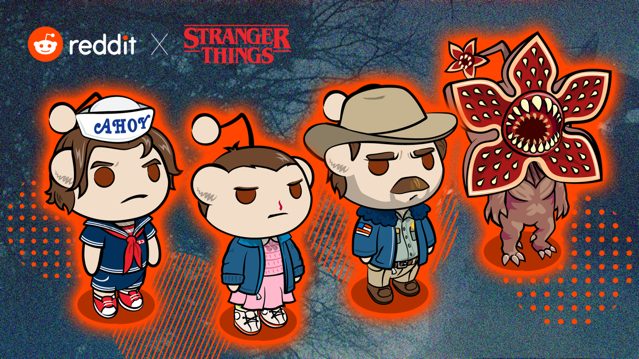 Reddit users have the option to choose Eleven, police chief Jim Hopper, Scoops Ahoy Steve, or even the Demogorgon as their avatar. To choose a Stranger Things avatar on Reddit, simply click on your profile and choose Style Avatar. You can locate the new Stranger Things avatars in the Explore tab.

.@Stranger_Things fans, we have a special treat for you (and no, it’s not Eggo waffles). We’ve partnered with @netflix to create four custom #StrangerThings avatars. Head to Reddit now to transform your avatar into Eleven, Scoops Ahoy Steve, the Demogorgon, or Hopper. pic.twitter.com/J6vLwShF6y

Netflix has been heavily promoting the upcoming season with merchandise, events, and more. Season 3 of Stranger Things aired on Netflix almost three years ago, so fans have been waiting for the new season for quite a while.

Last season saw the Hawkins friends battling the Mind Flayer and destroying the new mall in the process. Now, high school students, the group will continue to experience all the weird stuff happening in town in season 4.

Stranger Things season 4 will be split into two parts with ‘Volume 1’ airing on May 27 and ‘Volume 2’ set to premiere on July 1.