The Federal government is considering taxing digital e-commerce sales by foreign companies such as Apple, Amazon and Netflix, as Canadian companies want to level the playing field, claiming it’s unfair. 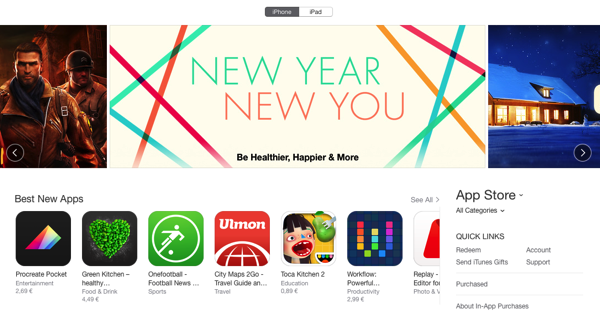 According to The Globe and Mail, Ottawa’s 2014 federal budget sought input from the public to debate whether e-commerce sales to Canadians by foreign-based companies should be taxed, similar to moves made by the EU and in Norway. Should policies change and taxes be required, it would add tens of millions of dollars to federal coffers.

The debate has remained relatively under the radar but now major companies on both sides of Canada and the U.S. are lobbying the Federal government, including the likes of Rogers.

Rogers sent their submission to the Federal government back in June of last year, arguing in favour of collecting sales tax on e-commerce tax by foreign-based vendors, noting:

“We recommend the Canadian government introduce a mandatory registration requirement for foreign-based suppliers of supplies in the digital economy to Canadian residents similar to the approaches taken in other Value Added Tax jurisdictions. In addition, we recommend the Canadian government should amend the rules around agency/billing agency for digital supplies into Canada as a complementary measure to mandatory registration.” 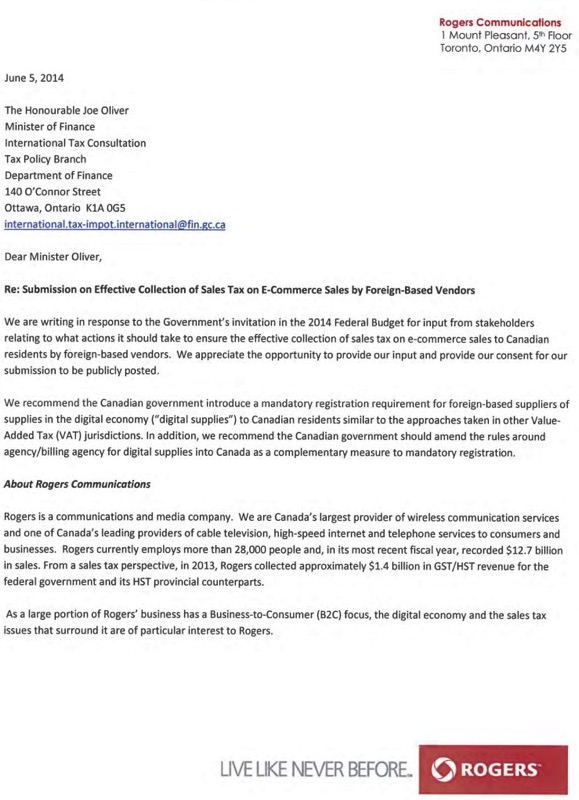 Consumers making digital purchases from foreign based vendors are supposed to ‘self-report’ them and pay HST or GST, but clearly this is not being practiced. This lack of tax creates a price gap on digital goods in the neighbourhood of 5-15%, as companies such as Netflix ($7.99 per month on your credit card for legacy customers) don’t collect tax on monthly subscriptions, but Rogers and their rival shomi service are required to ($8.99+tax).

In Rogers’ submission, they note “the reliance on consumer self-assessment in digital transactions causes revenue loss for the Canadian and provincial governments,” and also the “competitive disadvantage” for Canadian digital companies as they are required to charge GST/HST to customers.

Currently, foreign companies without a physical presence in Canada are not required to collect sales tax on digital sales.

According to the Globe, music or movies purchased from iTunes do not charge tax because Apple USA distributes them to Canada. In contrast, e-books and apps purchased do collect tax, as Apple Canada Inc. was incorporated years later here to process them.

Other companies such as Amazon.com do not collect tax on e-book sales to Canadians. Amazon, along with Netflix and Facebook recently hired lawyers Baker & McKenzie LLP, which last month registered to lobby the federal government on this issue.

The Department of Finance told the Globe and Mail it is looking at a variety of submissions from 16 companies, but only four agreed to make their input available to the public:

“Finance officials are continuing to examine the issue, collecting data and views from international partners, and exploring options. It would be premature to comment on possible revenue gains,”

The Alliance of Canadian Cinema, Television and Radio Artists (ACTRA) argues in their submission if Netflix were to collect tax, it would bring roughly $11.1 million in GST, while the provinces could get $15.6 million in sales tax.

One argument in favour of not enforcing tax collection is the fear some smaller businesses would flat out reject offering sales to a particular country to avoid the hassle of managing taxes.

With a federal election around the corner, the issue of having consumers pay more taxes is something no politician wants to touch with a 10-foot pole.

What do you think? Should Canadians be paying GST/PST/HST on digital sales from companies based outside of Canada?