An Apple Store Specialist named “Sam Sung”, who worked at the store in Vancouver, is no longer working for Apple and has joined a corporate recruiting firm, according to CNBC (via MacTrast). Last year, Mr. Sung became a bit of an Internet sensation when a visitor to a Canadian Apple Store noticed the name of the specialist assisting a family member. 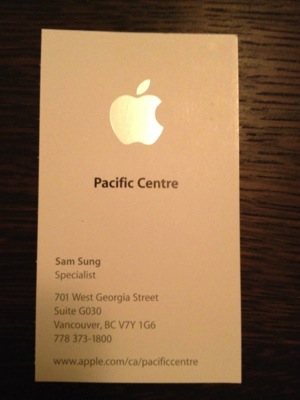 Sung was known to be a very friendly person. He had revealed to the source that he was aware of the Internet interest but couldn’t say much because of Apple’s strict media policy. The source claims to have recently called up the Pacific Centre Apple Store to confirm that Sam Sung was indeed no longer associated with Apple.

Check out the interesting telephonic conversation below:

“Where did Sam Sung go?”

“He decided to move on. He may have wanted to do something else.”

When Sam was reached for comment, he said he’d prefer not to comment out of respect for both his former and current employers.

Popular cryptocurrency exchange Coinbase on Thursday announced it had to disable the ability to send NFTs on the iOS version of Coinbase Wallet, the company's mobile crypto wallet app, because Apple wanted a 30% cut of the "gas fees" involved. https://twitter.com/CoinbaseWallet/status/1598354819735031809 Gas fees are essentially transaction fees on the Ethereum blockchain network. They are paid...
Nehal Malik
37 mins ago