According to video tracker Visible Measures (via AllThingsD), the most popular tech ad of 2012 goes to Samsung’s Galaxy S III ad mocking Apple users waiting in line for the iPhone 5 (earlier ads debuted during the Super Bowl; a similar ad debuted in 2011 mocking iPhone 4S buyers):

Samsung tops the list in 2012 with Galaxy S III, a satirical campaign mocking Apple and its fans. In fact, not only does Samsung nab the top spot on the list with 71 million views, which is 17 million views more than the runner up, it also grabs three other spots on the list, including number three, four, and eight.

The only Apple ad to make the top 10 list was their video introducing the iPhone 5.

Visible Measures notes Samsung, Google and Microsoft saw massive growth in terms of brand performance in 2012. Samsung generated over 240 million views from their campaigns this year, a 580% growth compared to last year, while Google and Microsoft each had growth in the triple digits. Here is the full top 10 list for viral tech ads of 2012: 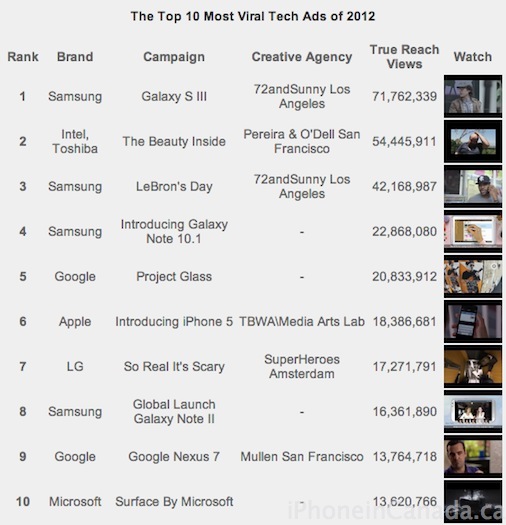 According to Visible Measures, Apple took the top spot for the most viral tech video in 2011, with their ‘Introducing the iPhone 4S‘ commercial, created by the agency TBWA/Media Arts Lab, below:

What do you think? Has Apple lost some of its video magic or has its competitors stepped up their game?