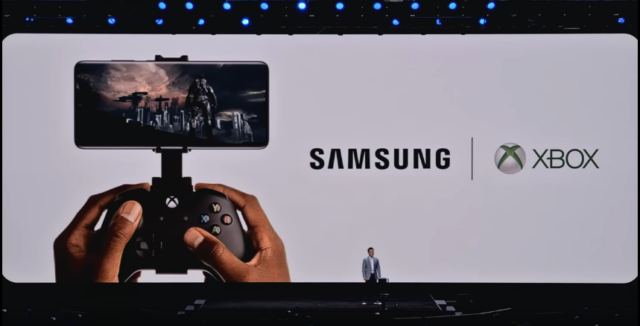 Yesterday, Samsung held its annual Samsung Unpacked event in San Fransisco where they officially unveiled their long-awaited Galaxy Z Flip and line of Galaxy S20 smartphones. Additionally, Samsung took this opportunity to announce the newly formed partnership between Microsoft and themselves.

On stage, Samsung revealed its plans to partner with Microsoft and its Xbox division. While this partnership is currently in the initial phases with the release of Forza Street, a mobile spinoff of Xbox Game Studios’ popular racing franchise, Samsung’s David S. Park stated: “This is just the beginning of our gaming partnership with Xbox.” Park continued to explain Samsung and Microsoft’s plans to offer a “premium cloud-based game streaming experience” to Xbox and Samsung users.

Many could assume this was in reference to Xbox’s Project xCloud, which recently launched in Canada. The Verge spoke to Kareem Choudhry, Microsoft’s Project xCloud Chief, after the announcement to gain a bit more clarity. Choudhry told The Verge: “We’ve seen positive feedback from Project xCloud preview participants testing a range of Galaxy devices, and it will only get better as we continue to work closely with Samsung on refining the experience. It’s an exciting time to be working on Project xCloud, and we can’t wait to share more about our work with Samsung later this year.”

Microsoft has previously stated that Project xCloud’s wide release is set for late 2020. One could assume that Samsung is going to play a major component in the longevity and sustainability of Microsoft’s plans to increase its Xbox user base by pulling from mobile players. Whether or not Microsoft has plans to increase its mobile games output, in a similar fashion as we’re seeing with Forza Street and 2019’s Gears POP!, remains unclear at the moment.

At this current time, Project xCloud is only accessible on Android devices and gives players access to over 50 titles. Apple’s tight beta restrictions behind TestFlight has proved to be somewhat of a hurdle for Microsoft as they continue to stress test servers, leaving iOS users out of the fold currently. No details on an iOS release have been given by Microsoft.